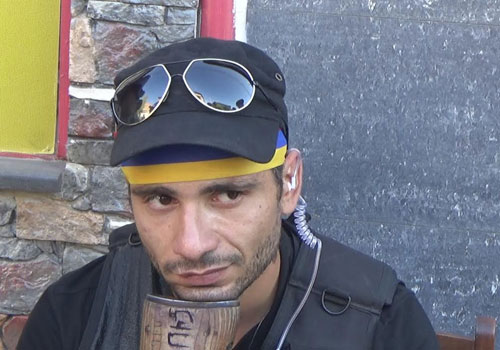 Unable to tolerate the increasing pains in his wounded leg and in the kidneys, Sasna Tsrer armed group member Hovhannes Harutyunyan, who is being held in Yerevan’s Nubarashen prison, has been self-injecting pain medications. Harutyunyan has been behind bars with an injured leg for over a year, but Armenian authorities have yet to send him for a leg surgery. Epress.am spoke to Harutyunyan’s lawyer Hayarpi Sargsyan about the health state of her client.

Harutyunyan was wounded and hospitalized after a shoot-out with police a week into the Yerevan police station siege in July 2016. Here, doctors removed some of the debris from the leg, but they never carried out a full surgery on it. Hayarpi Sargsyan has repeatedly stated that the leg has ended up in an extremely bad condition as a result – it has become thinner and changed color.

In December 2016, Sargsyan appealed to the European Court of Human Rights, stating that Harutyunyan was being subjected to ill-treatment in prison and that his life and health was in danger. The lawyer also argued that in view of her client’s conditions, imprisonment was not applicable to him as a form punishment. Having reviewed the submitted documents, the ECHR ruled that Harutyunyan’s life was actually under threat and obligated the Armenian government to immediately provide treatment to Harutyunyan and transfer him to a civilian hospital.

According to Sargsyan, however, the Armenian government has yet to take any steps to improve Harutyunyan’s condition. What’s more, physicians invited from abroad were not allowed to meet with him and were not provided with the results of his x-ray examinations. Despite the ECHR repeated demands to create a medical board with the foreign experts, only one of the physicians invited by the lawyer was allowed into the group. Nevertheless, a consultation took place, and it was decided that Harutyunyan needed only 20 days of rehabilitation treatment.

“[20 days of rehabilitation] for a shattered leg. The physician we had invited from Holland, meanwhile, insisted that Harutyunyan needed a surgery. But since his leg was getting thinner and stiffer, and he was in danger of losing it, we agreed at least to the 20-day treatment,” Sargsyan told us.

Last May, Harutyunyan was transferred to the Gratsia International Rehabilitation Center of the Armenian Red Cross. “But they refrained from carrying out frequent massages since there are still sharp debris remaining in the leg, and blood vessels could be damaged,” the lawyer said. In the epicrisis given out by the rehabilitation center, Sargsyan added, it is clearly stated that Harutyunyan’s movements are limited due to kidneys issues.

The epicrisis was sent to foreign doctors, who all came to the same conclusion that Harutyunyan needed a leg surgery and that it should have been carried out back in August 2016. According to the physicians, the failure to perform the surgery could lead to ankylosis – joint stiffness and chronic osteomyelitis.

Despite the fact that it is not recommended that Harutyunyan moves much, after an August 3 hearing into the Sasna Tsrer case he was pushed and forced down the stairs, Hayarpi Sargsyan argued, claiming that for some reason her client is intentionally being targeted by the authorities: “No other Sasna Tsrer member has had issues with medical treatment; every one of them who had been wounded has already been operated on.”

The ECHR has already demanded clarifications from the Armenian government regarding the incident in the courtroom, and Armenia’s authorities have asked time until September 6 to reply.