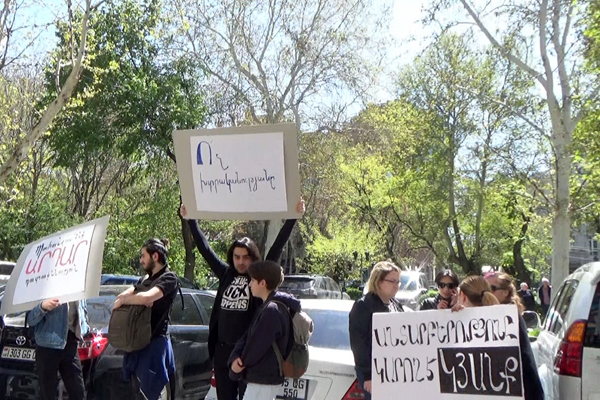 A group of demonstrators –  who held posters reading “We Demand a Fair Investigation,’ ‘No to Discrimination,’ and ‘Hatred Kills’ – gathered on Thursday outside the Armenian General Prosecutor’s Office in Yerevan to demand unbiased and comprehensive investigations into hate-motivated crimes and incidents.

The protest action was spurred by the two most recent hate crimes committed in Yerevan over the past few months: on February 27, a transgender woman was severely beaten up in her own apartment and was hospitalized as a result; then, on April 1, a 35-year-old man stabbed a 15-year-old boy in the center of Yerevan, having suspected that the boy was a homosexual. In both cases, the suspects were subsequently released from detention on their own recognizance.

“We have a constant fear that hate crimes based on sexual orientation will be left uninvestigated due to the law enforcement agencies’ improper attitude. The latest incidents were particularly egregious, since the injuries sustained by the victims could have led to their death.  The failure to carry out a fair investigation will leave us in an even more tragic situation,” Hovhannes Ishkhanyan, a representative of the Public Information and Need of Knowledge NGO (PINK Armenia) told Epress.am.

After the incident with the transgender woman, Ishkhanyan added, a number of social network users began encouraging the perpetrator: “This one probably also wanted to become a hero, so he went and stabbed a 15-year-old kid. The Prosecutor’s Office has to make it clear to people that these are not heroes, but criminals.”

According to official police statements, the suspects in both of the cases were released on their own recognizance after a brief detention, which, PINK Armenia lawyer Hasmik Petrosyan says, sends a bad and dangerous sygnal for the further developments in the investigations.

“The penalty of arrest is an extreme measure, and there is a systemic problem in Armenia with regard to this. The special circumstances of the case are never taken into account; people are imprisoned without an apparent necessity, with no suspicion or fact that they might attempt to evade the investigation. In many cases, when a transgender or a homosexual in Armenia is suspected of a minor crime, they are immediately arrested. But the person who caused a 15-year-old boy unjustified harm has been set free, which makes it possible for him not only to interfere with the investigation but also repeat the offense at any time,” Petrosyan argued.

At the end of the protest, the demonstrators submitted a letter to the Prosecutor’s Office, in which they demand that the officials conduct a comprehensive, full and unbiased investigation, guided by the principle of equality before the law; ensure everyone’s right to a fair trial; introduce and maintain statistics on hate-motivated crimes; take appropriate measures to prevent offenses and incidents based on sexual orientation or gender identity.