5:54pm: Pashinyan is calling upon the walls of police officers to put down their arms and join the protest against Serzh Sargsyan. “If you think that this movement will die down in a couple of days, then you’re mistaken. This movement will not die down until you put down your shields and join us.”

5:30pm: After a two-hour break at a park in the city center, Nikol Pashinyan is now leading his thousands of supporters to the Republic Square. Police forces in full riot gear can be seen blocking off ministry buildings, the General Prosecutor’s office from the marchers.

Masked officers of the police special forces in riot gear, meanwhile, are quickly gathering at the Republic Square to guard the main Government building, where Serzh Sargsyan is currently holding his first Cabinet session as the country’s Prime Minister.

4։58pm: Police officers in Gyumri today tried to detain a 26-year-old citizen who had previously taken part in an anti-government demonstration. According to our source, six officers attacked the young man around 3pm in the street and tried to violently put him in a police car. As a result, the man injured his leg and was transferred to the Gyumri medical center.

4։18pm: In a video published on Facebook, a man from the administration of the Yerevan State University of Languages and Social Sciences yells at journalist professor Mesrop Harutyunyan and demands that he does not encourage students to boycott classes. “Political activities are prohibited on the university premises,” the aggravated man says, to which Harutyunyan replies, “I did not encourage any political activities here; the students started the boycott, and I joined them.”

The professor goes on the demand that the administration rep speaks respectfully with him, otherwise “we’ll be twice as disrespectful.”

3:55pm: A number of employees of Synopsys Armenia today demanded from their employers to remove all photographs of Serzh Sargsyan from the office walls. When the company management refused to take down the photos, saying they were the property of the company, the protesters insisted that Sargsyan was no longer president and it did not make sense that his photos should be on the walls. “Photos of no dictators should be here,” they argued.

The management finally decided to remove not only Sargsyan’s but also all other photos from the walls.

2։50pm: The police press service reports that 100 people have been detained and taken to various police stations in Yerevan since early Thursday morning. Users on Facebook have started calling on people to go to the police stations and peacefully give themselves up to the police. Those making the call are convinced that they will thus be able to paralyze work at the stations.

Journalist Zaruhi Mejlumyan on Facebook:  “Total rights violations at the Shengavit police station: citizens are brought here with no justification; in cars with no license plates; in private cars; citizens are being pushed and pulled around. I’ve lost count of the detainees.

1։28pm: Detained demonstrator Vahagn Gevorgyan published a video on Facebook, in which he takes down the photo of Serzh Sargsyan from the wall of the Zeytun police station and throws it out of the window.

1։15pm: A group of employees of Synopsys Armenia went out and joined the demonstrators in blocking traffic on Arshakunyats Avenue. Police forcibly removed the people from the roadway; several have been detained. 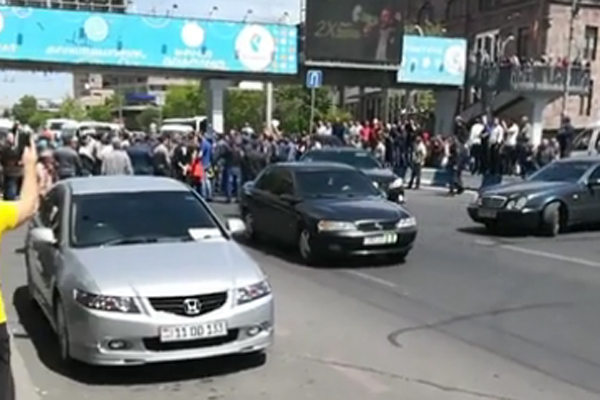 1։10pm: The first Government session headed by newly-elected Prime Minister Serzh Sargsyan is expected to take place today at 5pm, according to Nikol Pashinyan’s information. The demonstrators plan to surround the Government building and topple the session.

Lawyer Davit Gyurjyan: To the detainees, who are held in detention for over three hours for on suspicion of having allegedly committed a criminal offense, a person acquires a suspect’s status only in two cases: application of a preventive measure (for example, a written obligation not to leave place of residence) or ARREST ACCORDING THE CRIMINAL-PROCEDURAL CODE.

Thereby, demand first of all that you are informed about your criminal procedural status and presented with the ARREST protocol. Naturally, they won’t have one, and they will not say that you are a SUSPECT, because it is first of a fall a problem for them. You should hence make a recording of the fact and demand that you are immediately released.

12:20pm: The demonstrators have broken into two groups and are marching through different parts of Yerevan, calling upon people to join the protest and gather for the 7pm rally at Republic Square. According to the police press service, at least 30 people been detained and taken to various police stations in Yerevan since Thursday morning.

12։10 We’re getting reports from a number of schools of pupils being blocked inside building so that they are not able to go out and join the marches. “The teachers remained mainly neutral for several days, but now they are calling the parents and threatening to expel their kids. I call upon all school managements to remain neutral and allow school kids to exercise their constitutional rights and boycott classes,” opposition Yerkir Tsirani MP Zaruhi Postanjyan announced outside the Heratsi college.

A man then interrupted Postanjyan’s speech and urged her to “get the hell out of here.” Several women joined the man and began pushing and pulling the MP. The women tried to take away Postanjyan’s loudspeaker, to which the MP replied by calling them “Republican frauds!”

“So what if I am a Republican!? You’re going to get the kids killed!” one of the women yelled at Postanjyan. “Serzhik is the one killing the kids!” Postanjyan countered.

A report from Yerevan’s N115 high school after Sos Hovsepyan:

Police officers and the headmaster are entering classrooms and searching the students’ bags. The officers are scaring and intimidating the kids in almost every school. The kids are held in locked classrooms. Don’t send these poor kids to schools! Ignore the teachers’ calls! Don’t turn your kids into prisoners!

A report from Yerevan’s school N3 after Manuk Abeghyan:

This Monday demonstrators came to our school to urge us to join them. Several students left the school to join the protesters. The following day, our police officers – his name is Ludwig Gevorgyan, as far as I know – took all of these kids to the police station and kept them there until evening. I’m not sure what happened at the station, but I know everyone who is close to these students, including myself – we’ll be questioned by him when we next go to school.

11:15am: The thousands of demonstrators led by Nikol Pashinyan left the Republic Square and started a march through Yerevan streets. They have now reached the Sevan Street and are standing outside the Petak shopping center. The access to the center has been blocked by lines of police officers. Pashinyan is demanding that the entrance be unblocked for the people inside to be able to exercise their free will and join the protest.

11։00am: Journalists Tirayr Muradyan told Azatutyun.am that he was beaten up by plainclothes police officers whom he had noticed constantly talking on the phone and reporting the events to someone on the other line.

“There was a police van parked 10 meters away from the 3rd government building; theses people suddenly appeared next to me and asked why I was filming. They they went ahead and began hitting me. I shouted that I was a journalist – they could not have seen my badge. The uniformed officers in the van just sat there and watched. I went up to an officer later and said I had been beaten up, and he replied matter-of-factly, ‘yeah, I saw… so what?’

10։10am: Demonstrators are standing in front of the lines of police and chanting, “Make a step! Put down your arms!”

10։00am: Our correspondent reports that police used excessive force when detaining the demonstrators: “The officers got an order the unblock the entrance to the 3rd government building. When YSU Restart member Davit Petrosyan tried to get out of the police van, officers smashed his head hard against the window. Some of the officers started at some point chanting ‘I’m serving the Republic of Armenia!’”

Union of Informed Citizens NGO coordinator Daniel Ioannisyan on Facebook: “Two plainclothes police officers just beat up our reporter Tirayr Muradyan by the 3rd government building (Tirayr was wearing his badge).  Uniformed officers did not intervene. We have the photos of the perpetrators and will public them shortly.”

9։22am: Police got the man out from under the van and apprehended him. Our correspondent reports that the entrance to the 3rd government building is now open and employees are slowly getting inside. Several dozen demonstrators still in the area are chanting “shame shame!” 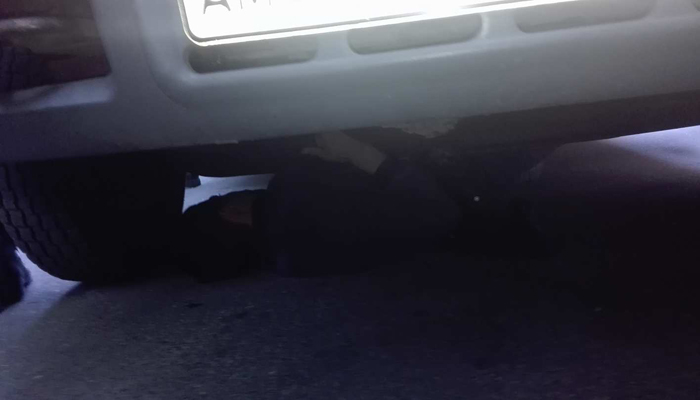 9։15am: Police continue to forcibly detain people. Dozens of demonstrators have surrounded and blocked the entrance to the 3rd government building. Note, some ministry employees were urging police officers not to detain the protesters, saying there were not against the demonstration.

9։00am Police have started using force against the demonstrators outside the 3rd government building. They have put protesters Davit Petrosyan and Mariamin Ananyan in a police car, but demonstrators refuse to open the way for the van. One person has gotten under the van to prevent it from moving.

8։55am: A group of demonstrators have sat down outside the main entrance to the government building. Nikol Pashinyan is calling upon ministry employees to join their peaceful protest. 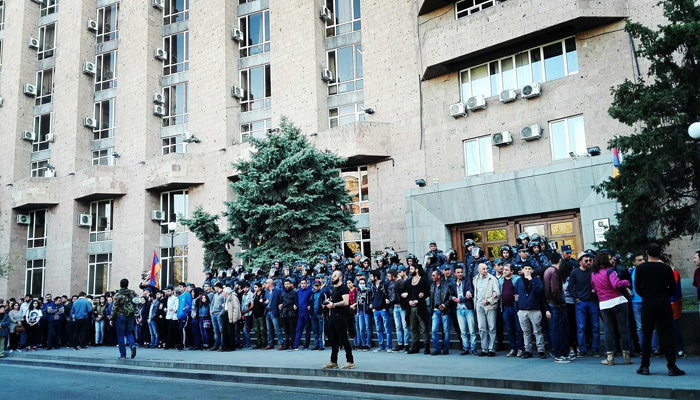 8:45am: Police are starting to push the dozens of demonstrators away from the main entrance to the 3rd government building. They demand that the protesters open the away for government employees.

8։33am: Nikol Pashinyan and a few hundred of his supporters met up at the Republic Square at 8am and went straight to the 3rd government building that houses several ministries. The building has already been cordoned off by lines of police officers in full riot gear. Some of the demonstrators remained here, others moved towards the backdoor of the building. Our correspondent reports that ministry employees do not have access to the building. 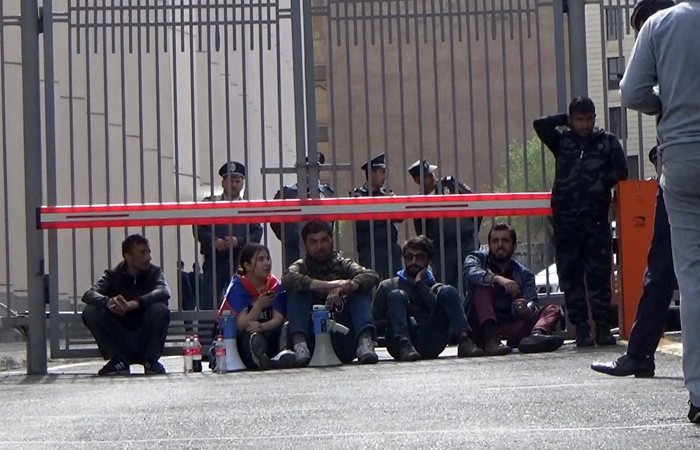 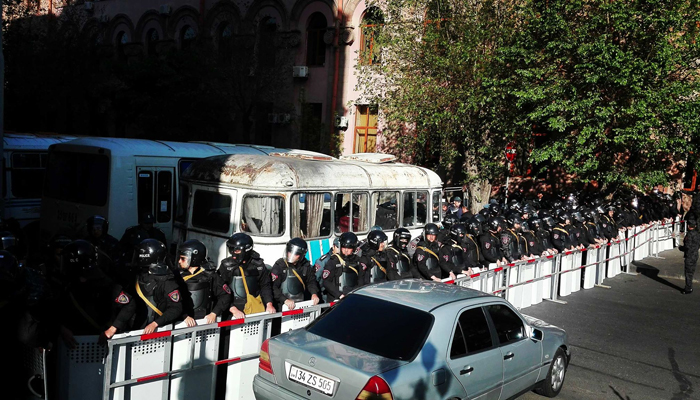