VIDEO: ‘Serzh Is Not Our Father’; Nearly 200 Demonstrators Detained Across Yerevan (Live Thread)

6:50pm: Hraparak.am reports that one of the men who today attacked medical students on Ayvazovski street was from the close circle of National Police Chief Vova Gasparyan’s security chief Arshak Hakobyan. “Another one, who had a bat, was Arshak’s brother, Sargis… The second was Arshak’s godson, the third was their friend,” Hraparak writes.

6:40p: Today at around 3:30pm, police on Koryun street were detaining not only demonstrators, but also citizens who were merely following the protests from the sidewalks. The officers were as always indifferent to any statements that condemned and shamed their actions.

6:25pm: Hundreds of red-beret officers are currently fighting demonstrators to unblock traffic on the Mashtots-Amiryan intersection in downtown Yerevan. The situation there is chaotic; over three dozen young demonstrators have been forcibly detained in the past hour. Drivers are sounding their car horns in support of the protesters.

At the same spot, several police officers earlier chased a man (on the photo below) and beat him up violently. The man ended up on the ground unconscious and was able to recover only after about 10 minutes with the help of other demonstrators. 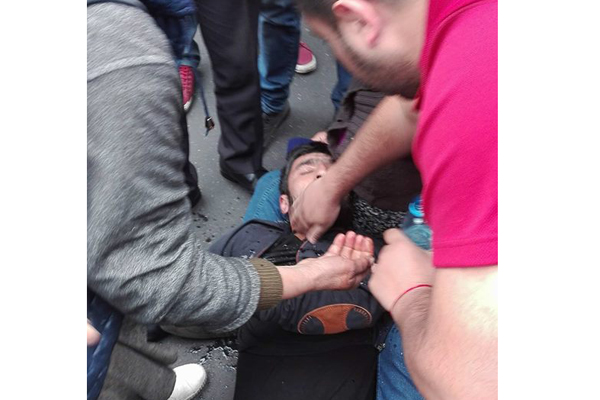 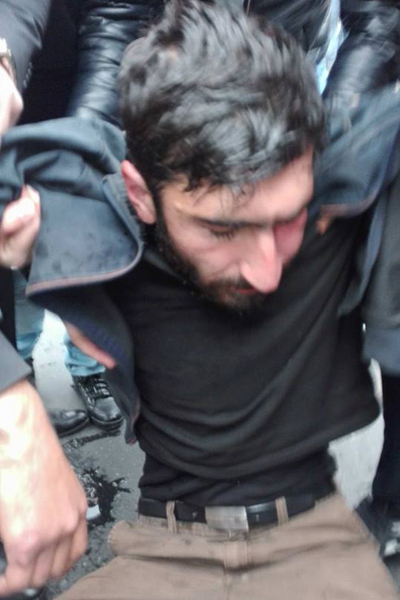 6pm: The locally famous Stop Club on Moskovyan street has joined the Reject Serzh movement and is playing revolutionary rock songs through loudspeaker right on the street. A police officer went up to the owner of the club in front of cameras and said he would go to Stop with 20 friends “in like two days for a birthday celebration.”

Speaking to reporters, the owner said he was naturally afraid of what police would do, but couldn’t have not joined the movement: “Rock has always been by the people’s side.”

5:55pm: One of the organizers of a demonstration in the Armenian city of Ararat informed Epress.am that the local police tried to hamper the protest by calling their parents. “We – mainly 17-30-year-olds – were discussing our plans in a Facebook chat. It turned out that there was a police person in the chat, and once we published the located of the demonstration, the police began immediately phoning our parents, despite that fact that we are all adults. Police are currently at the house of one of our friends. Nonetheless, we intend to carry out our protest; it’s scheduled for tomorrow. Ararat has to [Reject Serzh], too,” the citizen, who wished to remain anonymous, told us.

5:40pm: A group of citizens have gathered outside the “Abovyan” supermarket in the Armenian Abovyan city and intend to march toward the local House of Cinema. The people plan to drive to Yerevan in 40 cars for the 7pm rally at the Republic Square. 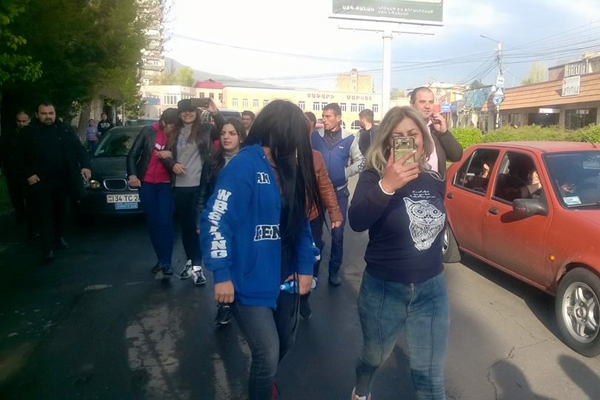 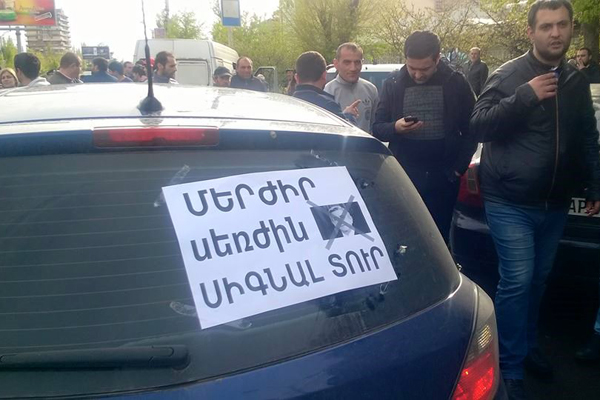 Arpine Galfayan on Facebook: Police officers who inappropriately touch [women]; demonstrators who “protect” women from their male heights; calls to come to rallies with their sexually-clad girlfriends to ensure the (male)multiplicity in the streets; poetic sexist comparisons with a brothel; calls from the stage addressed to the “guys,” and only one feminist sentence uttered the platform… wtf

3:55pm: Video of the “Serzh Is Not Our Father; We Don’t Have a Father” action carried out by a group of young women in central Yerevan. Police use excessive force to detain several of them. 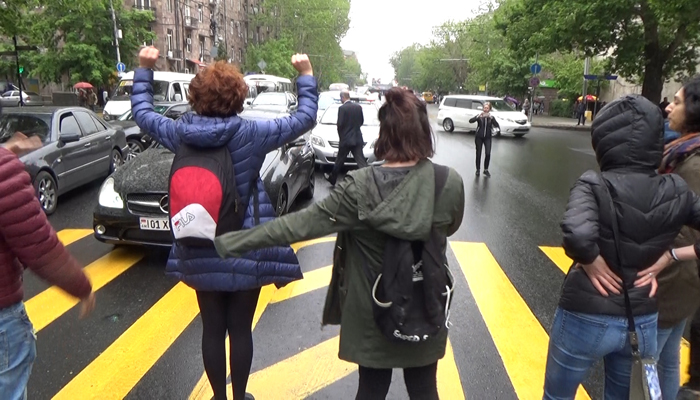 3։00pm: Detained demonstrator Zara Harutyunyan on Facebook: “They put me in the back cell of the police car so that we ‘feel the taste of the metal bars.’

“They just brought here two minors. I don’t know where they’re taking us. They refuse to identify themselves. There’s no one else with me in the back cell- they say a girl should know her place. The red-beret accompanying us is a nice guy though; he told me to stay strong when we were alone. I said their Major was an obviously bad person – it was written on his face. He replied that he couldn’t argue with that.”

2:55pm: Two drivers parked their cars on the roadway of Arshakunyats avenue and locked themselves inside the cars to block traffic. The police had warned them beforehand that the cars would be removed with evacuators if they did not leave. At around 2:55pm, evacuators removed these cars from the road, but they were quickly replaced by another vehicle. Police officers violently got the driver out of the cars, as a result of which the man fainted. Nonetheless, the officers pushed the man back into the car and moved it away.

2:03pm: Our correspondent reports that a group of demonstrators have blocked traffic on the Vagharshyan-Komitas intersection. Several buses carrying police are stuck in a traffic jam. Police officers in full riot gear are gathering in notably large numbers.

2։00pm: Groups of demonstrators continue blocking streets and bridges across Yerevan. The video below shows dozens of people paralyzing traffic on Khanjyan street.

1:35pm: Journalist Ani Gevorgyan published a video on Facebook, in which several men in civilian clothes attack and beat up a group of medical students on Ayvazovki street (Erebuni district). One of the attackers hit s student on the back with a bat.

“They were 16-18-year-old students of the local medical college who were trying to block the street. A group of men standing on the sidewalk reprimanded the young men that they were blocking the entrance to the [Erebuni] hospital, and they decided to go block the section of the street adjacent to the Erebuni museum. They were walking on the sidewalk when these men came up to them in a Toyota car,” Gevorgyan told us over the phone.

1։30pm: Three truck drivers joined the group of mainly young demonstrators blocking traffic on Kiyevyan bridge. One of the drivers told Azatutyun.am that he did not care about any possible consequences with the police: “We want the kids to have a good life.”

1։00pm: At 11am, a group of programmers carried out an Infinite Loop action to paralyze traffic on Alek Manukyan street. Eight of the programmers have been detained.

12։52pm: A group of young women briefly blocked traffic on Nalbandyan street in Sakharov street by walking back and forth on the pedestrian crossing and chanting “Serzh is not our father – we do not have a father.”

Red-beret officers quickly removed the woman from the street, and the group began marching to Republic Square. Human rights defender Lara Aharonyan and women’s rights activist Anna Nikoghosyan were detained during the march and taken to the Shengavit police station.

A young man who had joined the action was also detained. Our correspondent reports from the scene that the youth was subjected to violence inside the police car. The officers who detained him did not have any specific division insignia on their uniforms. 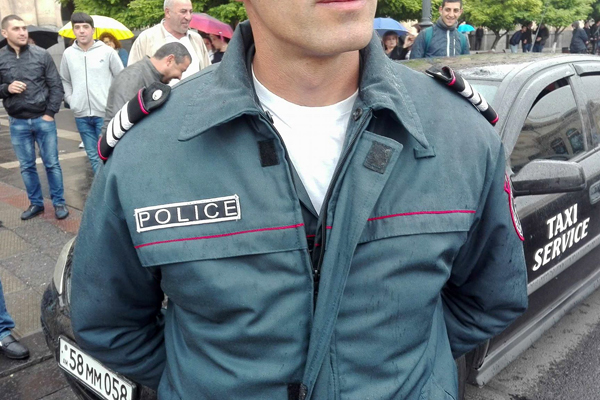 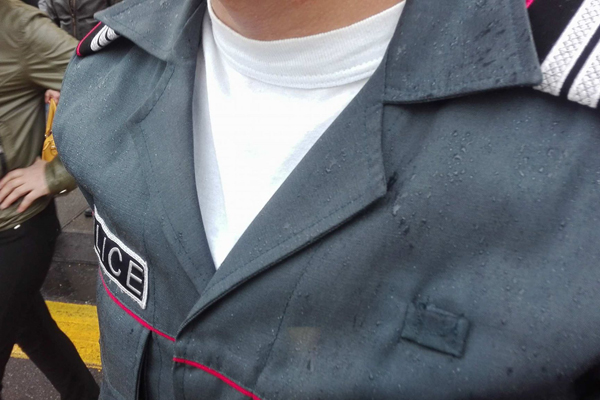 Thousands of demonstrators have since early Friday morning been blocking a number of streets and bridges in Yerevan. The situation across the Armenian capital is rather tense, with police forcibly detaining people to restore traffic. The number of detainees at the moment reaches 50; nearly a dozen people were just detained from the Azatutyun Avenue – the police put the people in the N1 city bus and demanded that the driver take them to a police station. A police officer sat behind the wheel himself after the driver refused to comply.

According to some reports, police in other parts of Yerevan are taking demonstrators to police stations in cars with no license plates.

Opposition leader Nikol Pashinyan and a group of demonstrators had paralyzed traffic on the Davtashen bridge; police were subsequently able to restore one-way traffic on the bridge. Pashinyan was holding a poster that urged drivers to sound their horns if they were against Serzh Sargsyan. Nearly every driver on the bridge supported his call. Early on Friday Pashinyan went live on Facebook to call upon people to join the Velvet Revolution and “show Serzh Sargsyan that he is not in control of the situation.” He urged people to take active steps to paralyze traffic across the capital, including cutting off their cars’ wires in the middle of the street.

Police are repeatedly announcing through loudspeakers that they will apprehend anyone who continues to carry out “illegal rallies.”

11:25am: Union of Informed Citizens NGO and SUT.am journalist Tirayr Muradyan was detained on the Yerevan-Abovyan highway. Muradyan was wearing his badge; the police did not explain why they were taking him into custody. Recall, Muradyan was yesterday hospitalized after being beaten up by a group of plainclothes police.

11։00am: Students of the Terlemezyan College had blocked traffic on Arshakunyats avenue. Some of them were forcibly detained by police.