7:20pm: The Republican Party’s parliamentary faction will not nominate a candidate for the May 8 prime minister elections and will support the candidacy nominated by the one third of the Parliament, RPA faction leader Vahram Baghdasaryan told reporters Wednesday evening.

“It doesn’t matter to us who candidate will be; we’ll support him. Meanwhile, I urge everyone to put an end to the current situation in the country – unblock the highways, the airport, stop the intolerance.”

7pm: Tsarukyan Alliance leader Gagik Tsarukyan announced minutes ago that his faction would again support Nikol Pashinayn in the May 8 PM elections. The announcement came after a short meeting with Pashinayn in Yerevan’s Marriott hotel.

6։20pm: Nearly a dozen protesters today took bags of potatoes and pasta to the house of Republican MP Hakob Hakobyan. Recall, the MP said when commenting on inflation last year that “the poor won’t be affected by it because they eat potatoes and not meat.” The several bags of potatoes, according to the protesters, would be enough for Hakobyan to survive on for a couple of days after the revolution.

6։05pm: Armenian Football Federation head Ruben Hayrapetyan today brawled with demonstrators who had blocked traffic in Yerevan’s Avan district as his car tried twice and failed to penetrate through the lines of protesters. After the second failed attempt, according to a Hetq.am reporter, Hayrapetyan got out of the car and hit one of the protesting kids on the scene.

5։20pm: A group of demonstrators gathered by the gates of the National Assembly building with a “You disgust us!” banner. Recall, at the NA session on Wednesday Yelk MP Sasun Mikayelyan said addressing Republican MPs that the thousands of people had come out to the streets not because of Pashinyan, but because “you disgust them and they are sick of you!”

Police officers tried and failed to convince the protesters not to hang the banner on the gates. 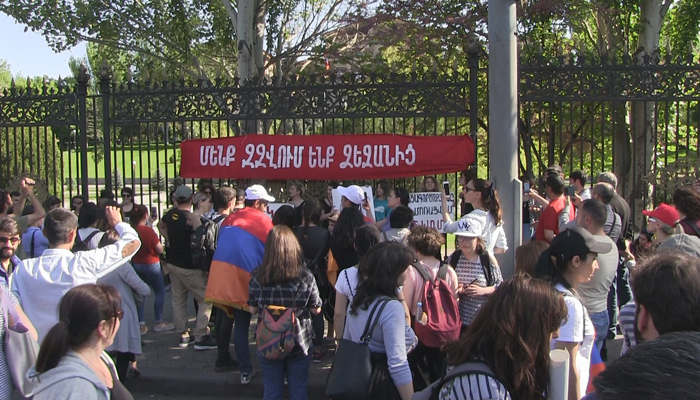 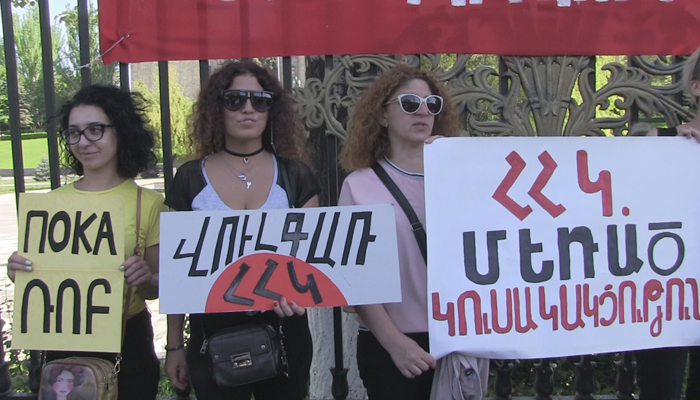 4:50pm: Traffic on a number of roads has already been restored:

4:20pm: Protest leader Nikol Pashinyan went live on Facebook to call on demonstrators to unblock all streets and roads by 5pm and start moving towards the Republic Square for the 7pm rally.

3:10pm: A group of demonstrators have blocked the entrance to the Araratbank branch on the Northern Avenue in downtown Yerevan. The bank belongs to businessman Barsegh Beglaryan who has close ties with Serzh Sargsyan. 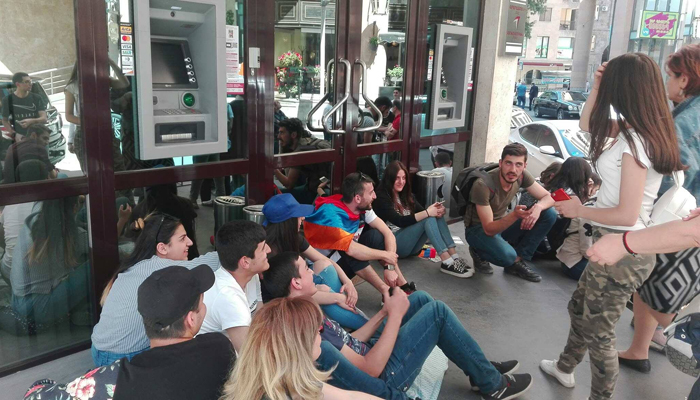 2։55pm: According to reports from Yeghegnadzor, Gazprom Armenia officials are threatened their employees with dismissal if they participate in opposition protests. According to our source, the management keeps lists of those who decide nonetheless to join the strikes. Note, until 2012 the head of Gazprom Armenia was former PM, Deputy Chairman of the Republican Party Karen Karapetyan.

2:45pm: Armenia’s first president Levon Ter-Perosyan has issued a statement on yesterday’s PM elections: “I can not help but point to the following: Article 94 of the Armenian Constitution states: ‘Deputies shall represent the whole people, shall not be bound by imperative mandate, shall be guided by their conscience and convictions.’

The international community has been constantly saying these days, the most important thing in the government-forming process is its compliance with the constitution and the letter of the law.

2:45pm: National Assembly speaker Ara Babloyan is calling on protesters to stop boycotting Republican MPs. “The illegal blockade of NA MPs should immediately stop. I urge everyone to refrain from interfering in [the Republicans’] personal lives. Such actions can not lead to any positive shift, and will not be tolerated by our state agencies and citizens.”

The owner of the video told Epress.am that the MP even drove his car on the stairs, which he did not manage to film.

2pm: According to various reports, high-ranking Republican officials and oligarchs are moving in Yerevan in ambulances to be able to navigate their way through the blocked streets.

1։57pm: Martuni mayor Armen Avetisyan and his staff have joined the ranks of street protesters, a Martuni resident informed us. We haven’t been able to get in touch with the mayor thus far.

Journalist Gayane Mkrtchyan on Facebook: “All stores, pharmacies, schools and even the post office are closed in Etchmiadzin. Banks are shutting down, too.”

1:20pm: Protesters have brought a wreath and a coffin with the image of Serzh Sargsyan and other representatives of the ruling party to the office of the Republican Party of Armenia in the city of Artik. Photo from Facebook 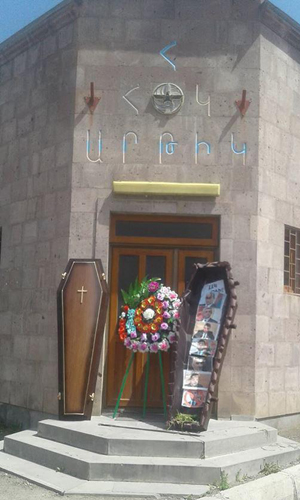 1:13pm: All central streets are closed in the city of Abovyan; all roads to Yerevan are also blocked. Most workers and students are on a strike. The disobedience actions are supposed to last until 4pm, after which the locals will head to the capital to take part in the 7pm rally on the Republic Square.

12:55pm: Elvira Meliksetyan on Facebook: “Vanadzor is love today! Staffs of hospitals, libraries and stores have joined the protest. Schoolchildren are proudly blocking roads. Hundreds marching towards the regional administration; strikes everywhere. They chant ‘Nikol for Prime Minister’ and ‘Shame!’ People give each other water and food in the streets. By the way, some police officers are also helping in blocking streets. The disobedience is decentralized; everyone has found their own corner. The whole city is beautifully making its step!  I’m falling in love all over again.” 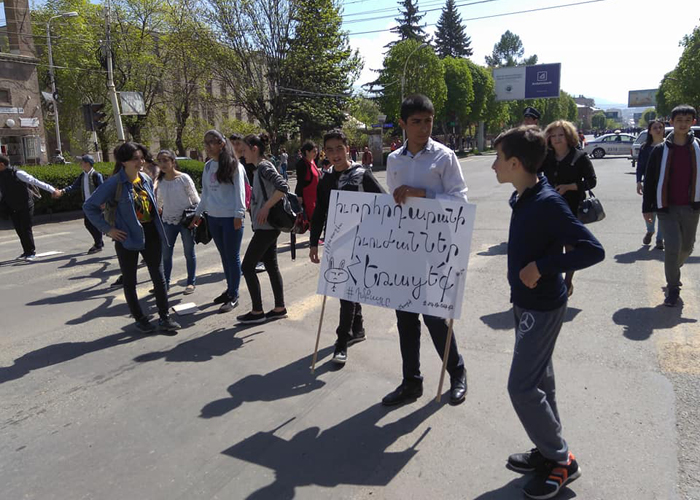 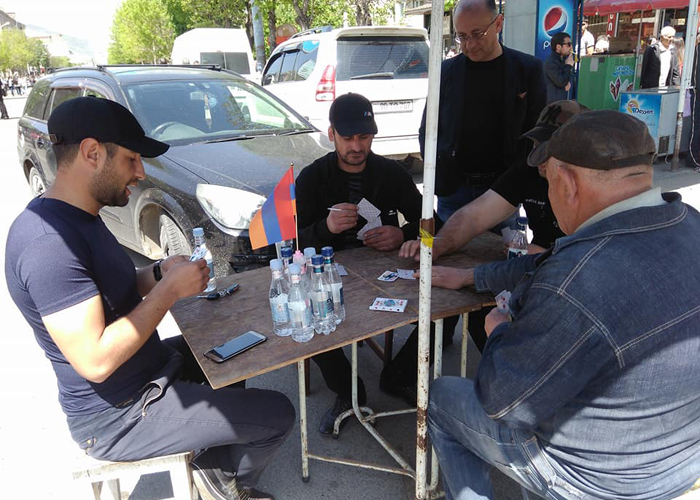 12:40pm: Demonstrators have surrounded a number of ministry buildings. All entrances of the Justice Ministry have been blocked by lawyers and advocates.

12:25pm: A number of protesters went to the apartment of Republican MP, singer Shushan Petrosyan’s apartment on Koryun 7 street, with the following chants: “Shushan, join us!” “Shushan, go away!” “Shushan, is it so hard to wake up? The people have come to you! Come out! You were the one singing ‘the country of my dream’!” (a line from one of Petrosyan’s songs)

The protesters also left leaflets with “Shushan, traitor” inside the apartment building.

12:15pm: Residents of the Gegharkunik province Vardenik village have blocked the roads leading to the hydropower plant belonging to Republican MP Hakob Hakobyan. The protesters demands that Hakobyan votes for Pashinyan in the next elections.

“Those who are not by their people’s side have no business in Armenia at all! We’re tired of lies!” a Vardenik resident told us.

Yerevan on May 2 morning:

11:50am: YSU Restart initiative member Davit Petrosyan has called on students to gather and demand a meeting with Republican MPs who are also professors at various universities.

“Ten of the Republican MPs who voted against Nikol Pashinyan on May 1 are professors in a number of universities. I urge to initiate a meeting with them in the coming days and call for their cooperation with the student movement. The Republican Party no longer has power in Armenia, but Republican MPs still have a chance to save their dignity.

The Republican professors are:

11:35am: A group of teachers from the N38 school  in Yerevan have addressed an open letter to the chairman of the Republican Party of Armenia: “Many years ago we involuntarily ended up in the ranks of the Republican Party, and today we are leave this party of our own free will. Our disappointment with the ruling party reached its peak on May 1, due to the Republicans’ questions to PM candidate Nikol Pashinyan and their speeches during Parliament sitting. It is humiliating for us to remain in the ranks of this party.”

11:30am: A group of young protesters stood in front of the Melik-Adamyan office of the Republican Party of Armenia in downtown Yerevan for 10 minutes and chanted, “RPA, go away!” 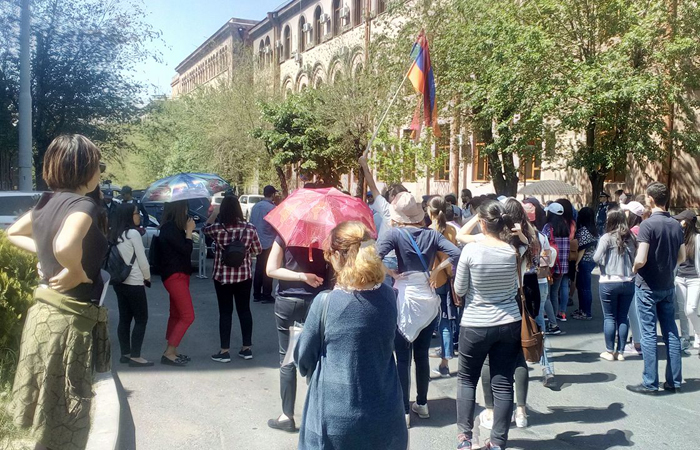 11:15am: The whole country is paralyzed. All important roads are closed; residents of hundreds of villages and towns are in the streets. People everywhere are holding strikes and boycotts of classes. 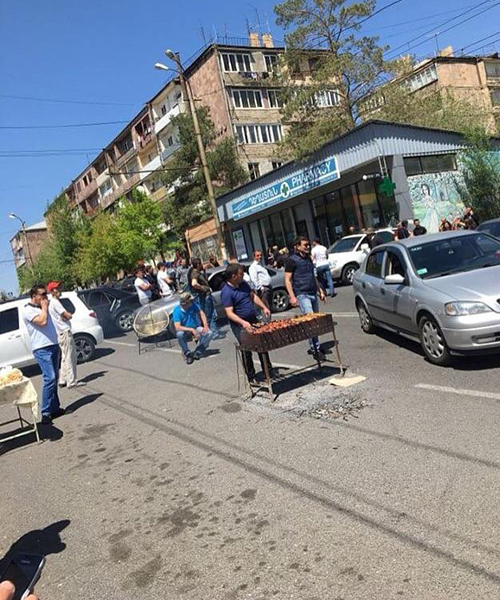 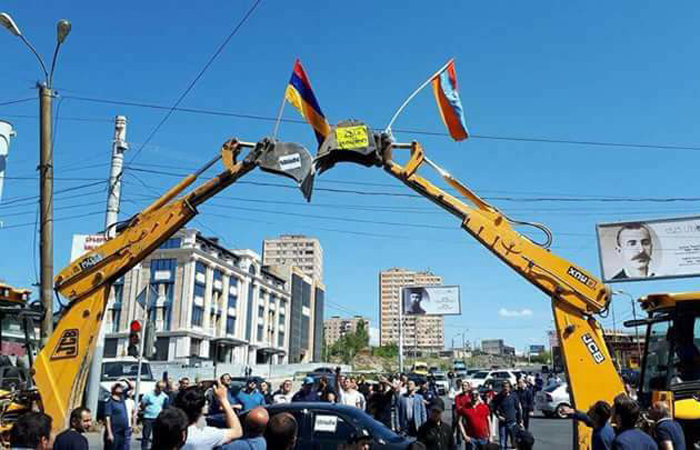 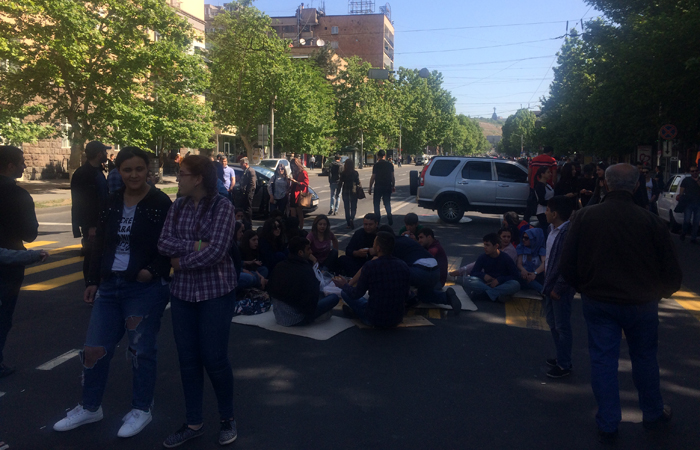 10:51am: The teachers of the Dilijan military-sports college named after. Monte Melkonyan have announced a strike. According to our source, there are no servicemen among the protesters.

10:36am: Protest leader Nikol Pashinyan is on the Arshakunyats Avenue. He has called on demonstrators to open all blocked roads at 5pm so that people are able to go to the 7pm rally in the Republic Square.

10:05am: The Yerevan-Meghri highway and all surrounding roads are blocked. 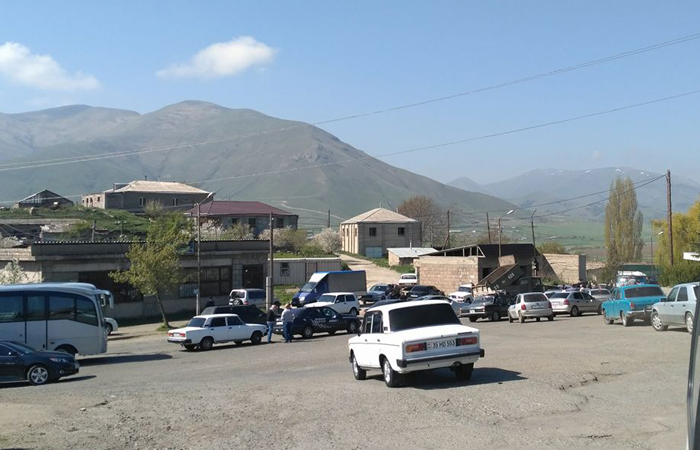 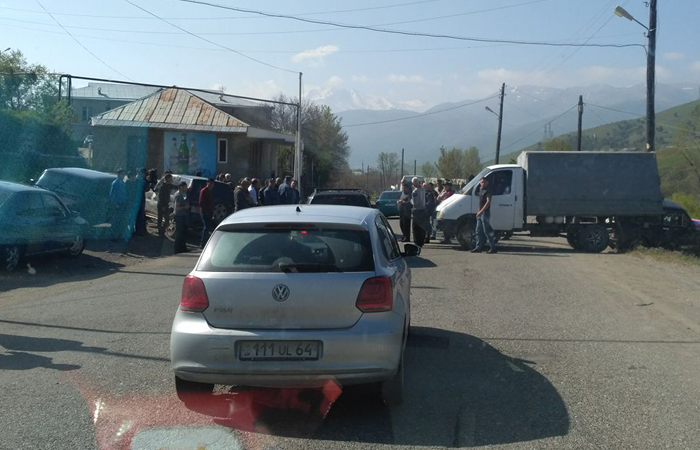 10:15am: The Yerevan Metro is not operating due to protesters having blocked entrances to a number of stations. A Metro employee told our correspondent they had started work as usual at 7am and were not taking part in the strikes.

9:45am: A number of employees of the Zvartnots Airport in Yerevan have joined the nationwide strikes. Dozens of staff members left the airport building and joined the protesters blocking the adjacent roads.

9։40am: Students of dozens of Yerevan schools are boycotting classes. Headmasters of some schools, nevertheless, are trying to prevent the strike by locking the kids inside the building.

9:23am: The Armenian community of California’s Glendale is has organized a petition with a call to the US government to ban the entry of 55 MPs from the Republican Party of Armenia into the country. 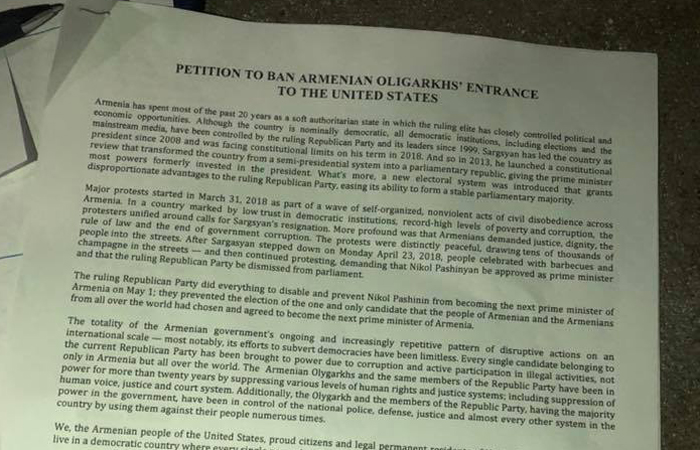 9am: All the main bridges in Yerevan are blocked. Demonstrators on Kiyevyan bridge are calling for the the RPA to “go away” and urging police officers to join the protest movement.

8։45am: All construction workers at the Amulsar mine in the Vayots Dzor region have declared a strike and decided to head to Yerevan. Part of them has blocked the Armenia-Iran interstate road. The road from Ashtarak to Yerevan is also blocked.

8։30am: Following Nikol Pashinyan’s corresponding call, large-scale nonviolent acts of disobedience have resumed throughout Armenia on Wednesday morning. Traffic has already been paralyzed on a number of Yerevan and regional roads. Workers and students across the country have started strikes. 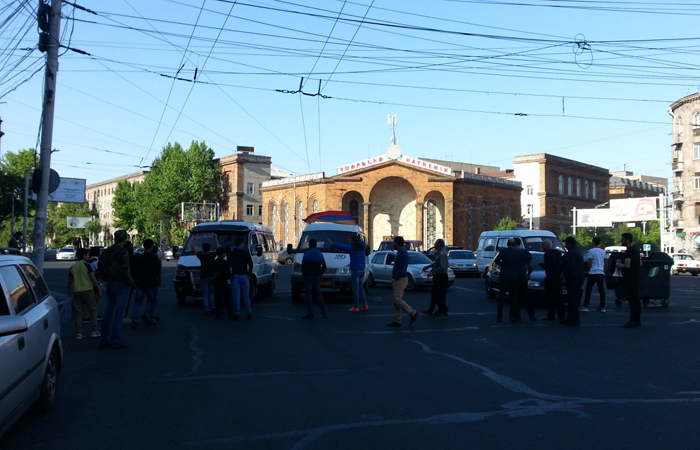 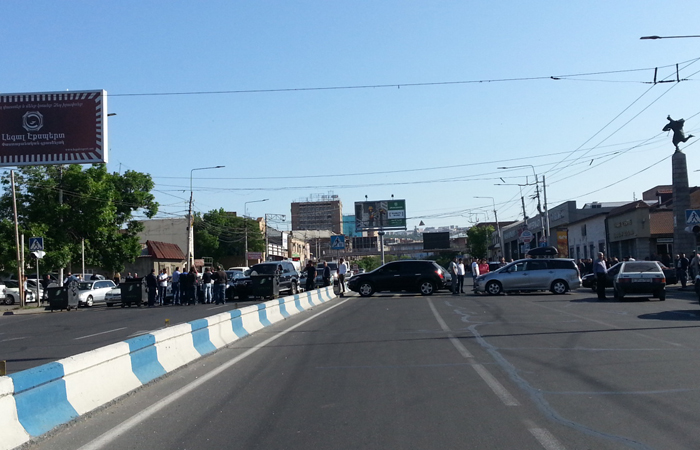 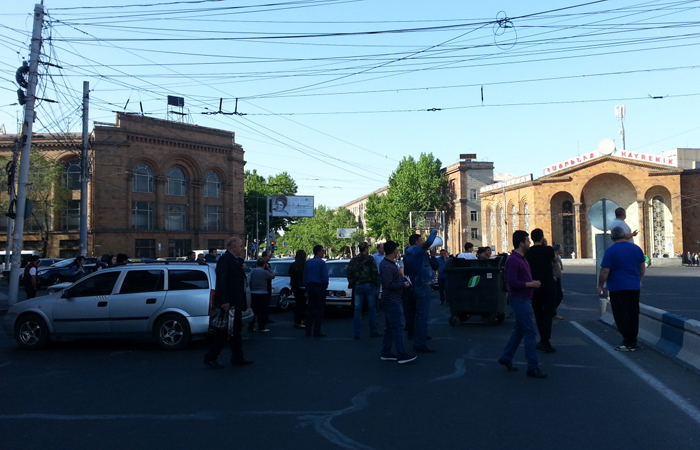