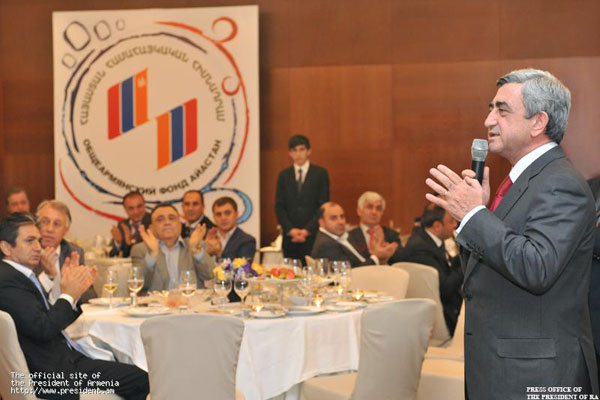 For years, Armenia TV company has been airing not only the fundraising telemarathon of the Armenia Fund, but has devoted many programs to glorify this institution. This year, however, the TV company refused to air the 21st telemarathon under the pretense of non-expediency.

Days before the telemarathon, Armenia TV would normally advertise the importance of donating money to reconstruct Armenia and Artsakh. This initiative would be presented as the sole aim and dream of all Armenians. “Take part in strengthening the homeland, join the national telemarathon of donating to the All-Armenian Armenia fund”, would be advertised on Armenia TV.

“The Fund is an exceptional institution and has proven by its work that it is possible to have an apolitical and pan-national organization enjoying a high rate of confidence and efficiency that satisfies everyone,” would be fervently pronounced by Artak Alexanyan, Armenia TV host and journalist  at a TV program dedicated to Armenia Fund’s Board of Trustees meeting.

It was only a year ago that the TV company produced a video dedicated to the 25th anniversary of the Fund. Serj Sargsyan, head of state at that time and Chairman of the Fund’s Board of Trustees, visited the office of the Fund and gave a speech on the importance of the Fund. “The mission of the Fund is to help Armenia and Artsakh to overcome problems, to stand by the Armenian man.” He mentioned that transparency was the Fund’s mode of operation.

It was on Armenia TV’s air that Karen Karapetyan, Prime-Minister of the time, decided to show off and donate his one year salary to the Fund.

In one of its many programs dedicated to Armenia Fund, Armenia TV featured Ara Vardanyan, director of the Fund and “the idea of charity.” The produced video was speaking about Vardanyan having guess lectured at Brusov University and having spoken with students of the necessity and importance of charity. “The Fund has embarked on promoting the idea of charity, which in Armenia is not so wide-spread, unfortunately.”

In their ode to Vardanyan, Armenia TV was reporting that his mission was to be a philanthropist. His charity mission was interrupted in July this year when the National Security Service found out that he had used the Fund’s bank account card in casinos. Vardanyan, who headed the Fund for over 10 years, was arrested with an accusation of money embezzlement, abuse of a public organization servant’s powers. He was bailed out on July 5th.

Vardanyan did admit that he was in possession of the 25mln AMD credit card given to the Fund, he also acknowledged that he used the money available on the card for personal purposes, including in online casino bets. However, he later returned the amount used for personal purposes to the accounts where donated money was kept. He made cash deposits in the Fund’s accounting department in order to conceal embezzlement of the Fund’s finances.

Only between 2016 and 2018 Vardanyan transferred 130mln AMD from the Fund’s bank card to online casinos.

After the embezzlement scandal of Vardanyan, Haykak Arshamyan was appointed chief executive officer of the Fund.

Normally the Fund turns to TV companies to air the telemarthon, which do it for free as their own contribution.

In a conversation with Epress.am, the Fund’s press department mentioned that this year the telemarathon was broadcast by the Public TV company and Yerkir Media TV channel. In 2018, the Fund did not turn to Shant TV company, “as the coverage provided by the other TV companies was sufficient.” The Fund also turned to Armenia TV, and received a rejection.

For days, Epress.am was trying to contact the TV company to find out the reasons for this rejection as it had always broadcast the telemarathon and had advertised the Fund. Every time, we would be told that a return phone call would be made in a few hours, however we never received feedback.

The media group is headed by Mikayel Minasyan, Serj Sargsyan’s son-in-law and former ambassador of Armenia to the Vatican.