Peace in Karabakh Armenia’s Only Chance for Safety and Prosperity, Ter-Petrosyan Says 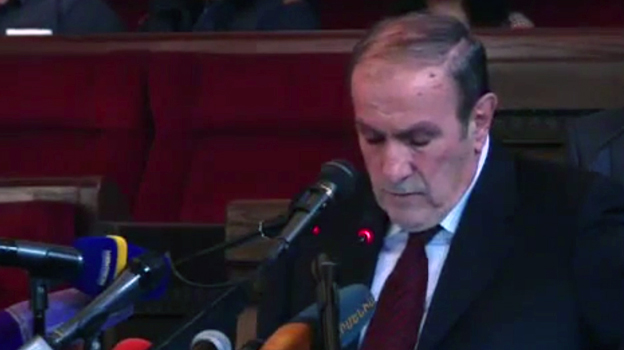 At the weekend congress of the opposition Armenian National Congress party, it’s leader, Armenia’s first President Levon Ter-Petrosyan spoke about the necessity of resolving the Nagorno-Karabakh conflict and criticized the Armenian government for its proposed “nation-army” movement, stressing that the only Israeli initiative adopted by Armenia’s government should be the Peace Now movement.

“The ‘nation-army’ plan is an ill-considered and dangerous initiative destined to fail; it will only spur emigration and result in a final exile of Armenians from Armenia and Karabakh. One gets the impression that the regime intends to implement the ‘nation-army’ plan at the price of liquidation of one of its main components – the nation. In other words, we may one day end up having a powerful army, but it is doubtful whether we will have any nation left,” Ter-Petrosyan said.

Before going into the details of his argument, the first president touched on the role of the Diaspora and the expectations attached to it; “In terms of human resources, Armenia’s authorities are largely pinning their hopes on the Diaspora. Being from the Diaspora myself, I reserve the right to state with full responsibility that this expectation is pure delirium and delusion. Suffice it to recall that a total of only 12 thousand Diaspora Armenians took part in the 3-year war in the 1990s. […] Were Armenia’s economy not in such a deplorable state today, [authorities] would never adopt the shameful law of begging 1000 drams from the people for helping the families of killed or wounded servicemen, which, in addition to discrediting the idea of ‘nation-army’, dealt a severe blow to the dignity of our state, turning us into an object of ridicule before the whole world.

“The Diaspora should not be relied upon for significant material resources either; first of all, why should the Diaspora help Armenia, whose resources are being plundered by its own authorities? Secondly, as grateful and appreciative as we are for the humanitarian assistance provided by Diaspora philanthropists and ordinary people in the period of independence, one should not forget that it has never exceeded the 2-3% of our country’s annual budget.”

According to the ANC leader, Armenia is not obliged to resort to the extreme measure of creating a “nation-army” to ensure its safe existence; it should, instead, resolve the Nagorno-Karabakh issue.

“The resolution of disputes and establishment of good neighbourly relations with Turkey and Azerbaijan depends solely on the Karabakh conflict settlement… We can’t ignore the fact that despite Turkey’s unconditional political support for Azerbaijan in this issue, the former, besides the blockade, has taken no other hostile steps against Armenia and has done nothing to prevent the territorial expansion of Karabakh. Moreover, paradoxical as it may sound, by instilling great hopes with its demonstrative support and thus pushing Azerbaijan to intransigence, Turkey, in a sense, has even encouraged the success of the Artsakh army. Had it remained neutral and not pushed Azerbaijan to intransigence, the latter, after losing Kalbajar, would not have lost the additional 5 regions of its territory. Turkey’s destructive intervention has thereby not softened, but further exacerbated the tensions around the Karabakh conflict,” Ter-Petrosyan said.

“Of course, one might think – and many do think this way – that the ‘army-nation’ initiative is the authorities’ yet another patriotic flirtation or an empty pre-election campaign slogan – ‘let the entire nation become fedayi,’ ‘global nation,’ ‘nation-organization,’ ‘sea to sea Armenia,’ ‘no inch of land,’ ‘all-Armenian army,’ ‘Gyumri – a technopark,’ ‘Dilijan – a financial center,’ ‘Istanbul – a sea of blood.’ If this is in fact the case, then the idea of a ‘nation-army’ is not too dangerous, because it will soon burst, like all the other previous bubbles. But if the regime is serious in its intentions, then the issue requires an equally serious approach. One does not have to be a genius to understand that this is the same strategy of maintaining the status quo, supplied in a different package. That is, a bankrupt, morally worn, and boring brand has been replaced with a new, more appealing one. In other words, having not learned anything from the bitter experience of the past 18 years, the regime has decided to continue the notorious policy of eternal confrontation with Azerbaijan and Turkey, which, in this short period, has already caused a lot of economic, social, demographic, and moral and psychological troubles in Armenia and Karabakh. This means another 18 years of being exposed to these troubles, until there is nothing left of either Armenia or Karabakh, and the issue itself loses relevance. It has been said time and time again that the main guarantor of Armenia and Karabakh’s security, economic development and demographic situation is the settlement of the Karabakh conflict and the normalization of Armenian-Turkish relations. It turns out, however, that 18 years was not enough for our authorities to understand this plain truth. The only issue that matters is the resolution of the Karabakh conflict, after which the relations with Turkey will resolve themselves. And there can be no other way to the conflict settlement but a gradual one. The same compromise proposal from 1997 is on the negotiation table today: granting Karabakh an internationally recognized intermediate status in exchange for a concession of some territories, and leaving the issue of the final status to the future, with a guaranteed deployment of peacekeeping forces in the Karabakh-Azerbaijani contact line.”

The leader of Armenia’s main opposition party then proceeded to presenting the ANC’s vision of the Karabakh conflict resolution in a few short notes; “a – without addressing this issue, Armenia and Karabakh are deprived of any security, development, and prosperity prospects: 18 years should have been enough time to realize this;

“b – the proposal that is currently on the negotiation table is the only possible one. We should not miss the moment, because the next offer will be a worse one for us;

“c – the parties should not think of themselves as winners or losers should a settlement be achieved; otherwise, in the long run, their relationship will be fraught with the constant threat of renewed conflict;

“d – Armenian National Congress, as already noted, has no other levers of influence on the process of settlement, except for statement of opinions;

“e – the responsibility for solving the problem lies entirely on the ruling regime and the political forces upon which it relies. Do they want take our opinion into account? Very good. No? Then the blame lies solely on them;

“f – if our government is able to achieve a more favourable and victorious solution, we will only congratulate it and apologize to them;

“g – we equally sympathize with the suffering caused by the conflict to not only Armenians, but also Azerbaijanis and sincerely believe in the two nations’ peaceful coexistence and the establishment of good neighbourly relations between them.”