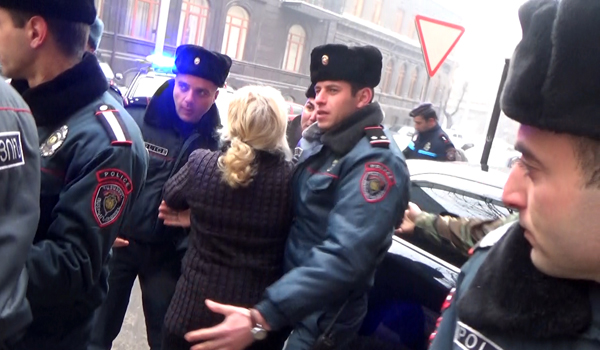 Police officers today used excessive force against the mothers of soldiers who died in Armenia’s armed forces in non-combat incidents; the women had gathered outside the main government building on Thursday morning with the intention of meeting defense minister Vigen Sargsyan and requesting a meeting appointment with him; however, the guards tried to forcibly make the women leave the area and, according to protester Nana Muradyan, one of the officers went as far as to spit at her and call her a “hobo” and a “humbug.”

Nana Muradyan, mother of soldier Valery Muradyan who died in the army in 2010, told an Epress.am reporter that prior to the reporters’ arrival, when she was standing by the building’s backdoor, police officers made her move “one step to the side,” claiming that she was hindering traffic. Afterwards, Muradyan added, she was approached by several officers, one of whom forcibly dragged her to a police car, spat at her face, called her a “hobo” and a “humbug,” and threatened to take the woman to a station. Muradyan was released only after the interference of a higher ranking officer who, according to the woman, also made sure that the officer who had allegedly insulted her was “quickly taken away from the scene.”

When our reporter raised the question as to why the officers had dragged the mothers and threatened to detain them, the law enforcers either avoided to respond or claimed they had done no such thing. “We had no intention of taking them to a station. If we wanted to, we would have already detained them,” one of the officers stated.

The protesters demanded to view the footage shot by the government building’s surveillance cameras; however, the officers replied that they “wouldn’t know whom to go to with such a request.”

Meanwhile, defense minister Sargsyan passed the mothers in his car, ignoring the women’s calls to stop. Shortly after, an unknown official came up to the mothers, took their phone numbers and promised to call them within two days.