‘Connect the Dots Between Philanthropists and Miners;’ AEF on Amulsar Gold Mining Project

The Armenian Environmental Front (AEF), which has for years been fighting against the exploitation of the Amulsar gold mine in Armenia, has published a detailed article about the corporations and individual philanthropists linked with the controversial mining project.

Below is AEF’s article in full: 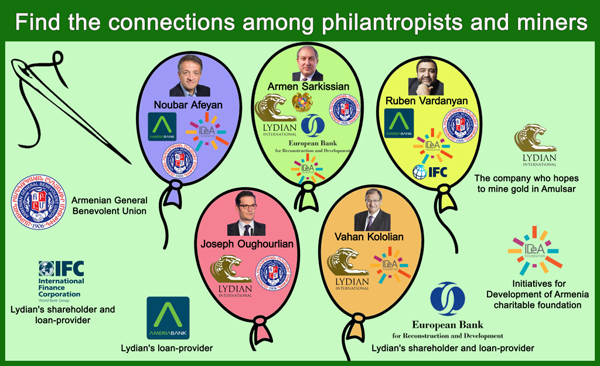 Lydian Armenia (former Geoteam): the company who intends to mine gold in Amulsar. The company has no prior mining experience whatsoever. Geoteam was founded in 2005. 100% of the company’s shares belong to Lydian International open stock company. Lydian International is registered offshore in Jersey, Channel Islands, a financial tax heaven providing “one of the best wealth management services in the world.” Jersey is a self-governing jurisdiction under the Crown of the UK, while it has its own legislation, its around 100.000 inhabitants are holders of a UK passport. As a tax heaven, Jersey makes it easy for companies to hide their founders and beneficiary owners, as well as affiliated beneficiaries. Since 2008, Lydian International has also been registered on Toronto Stock Exchange which makes it possible to detect owners of its securities, but not founders and beneficiary owners.

Who supports Lydian in this much criticized gold-mining project? We chose to skip investment companies and hedge-funds here, and instead, we focus on connections of well-known Armenian philanthropist-businessmen and development organizations with mining business. Interestingly, all of these businessmen have high-level presence in the Armenian General Benevolent Union (AGBU) and “Initiatives for Development of Armenia” (IDeA) charitable foundation.

European Bank for Reconstruction and Development (EBRD). A major shareholder of Lydian International; provides large loans for Amulsar gold mining project. Was created in 1991 by the governments of the US and European states specifically in order to promote privatization in the former Soviet states and support private business.

International Finance Corporation, World Bank group (IFC). A major shareholder of Lydian International; provides large loans for Amulsar gold mining project. Established in 1956 as the private sector arm of the World Bank has been directly and through intermediary banks been financing for 70 years private business in developing countries with the aim of reducing poverty and developing these countries. In Armenia too, for the past 20 years it has aimed to reduce poverty and support country’s privatization.

Ameriabank. An Armenian bank which strives to create an image of a “green and social-oriented” bank, however, signed a $24 million loan agreement with Lydian Armenia for buying mining equipment for Amulsar gold mining. One of Ameriabank’s shareholders is EBRD which is directly financing Amulsar project, but also indirectly involved through its Ameriabank decision-making power.

“Initiatives for Development of Armenia” (IDeA): charitable foundation aims at development of social entrepreneurship in Armenia. The foundation endorses 10 development models some of which are quite contradictory, for example development of healthcare and agriculture-farming vs. mining industry. One of the projects of IDeA foundation is Aurora humanitarian initiative. Almost every “philanthropist-businessmen” presented in the picture affiliated with Amulsar gold mining is either a founder, a trustee or a donor of IDeA foundation.

Armenian General Benevolent Union (AGBU) claims to be the world’s largest non-profit organization devoted to upholding the Armenian heritage through educational, cultural and humanitarian programs. Almost every “philanthropist-businessmen” presented in the picture and affiliated with Amulsar gold mining is a member of the Central Board of Directors of AGBU.

Armen Sarkissian: Ambassador of Armenia in the UK in 1991-95 and from 2013 till present. Prime Minister of Armenia in 1996-97. Director of Lydian International’s board in March-September 2013; during this period he managed to gain important approvals from the government of Armenia, as well as funding support of important financial organizations for Amulsar gold mining. In the period of his directorship in Lydian, he organized a visit of Prince Charles (UK) to Armenia in the framework of a project called “Yerevan, my Love” which deserves further investigation of its own. Sarkissian was the special advisor of the president and governor of EBRD (a shareholder and loan-provider to Lydian) in 1993-2000. On the other angle, he is a member of the Board of Governors and Trustees of UWC Dilijan college, IDeA foundation and is a member of the Central Board of Directors of AGBU.

Ruben Vardanyan, a Russian businessmen, also creates an image of a philanthropist. One of the founders of “Sberbank CIB” business-group in Russia which was created as a result of merger of “Sberbank” and “Troika Dialogue” companies. His name was found in the infamous Panama papers. He recently became known in Armenia for his charity projects: he is the co-founder of IDeA foundation, is a member of the Central Board of Directors of AGBU. In the meanwhile, he is also a member of the Board of Governance of Ameriabank (a loan-provider to Lydian International for mining in Amulsar), and a member of the Economic Council of the International Finance Corporation (a shareholder and loan-provider to Lydian).

Noubar Afeyan: American entrepreneur, the founder of Flagship Ventures which creates and finances start-ups that respond to the needs in healthcare and sustainability. He is a Board member of IDeA foundation, and, together with Ruben Vardanyan, a co-founder of Aurora humanitarian imitative. He is also a member of the Central Board of Directors of AGBU. In the meanwhile, Afeyan, together with Ruban Vardanyan, is a board member of Ameriabank, a loan-provider for Amulsar gold mining.

Joseph Oughourlian: the founder, managing partner and portfolio manager of Amber Capital, one of the largest shareholders of Lydian International. Amber Capital is also a shareholder in Artsakh HEK (hydro electric power plant of Nagorno Karabagh). Oughourlian is a member of the Central Board of Directors of AGBU since 2010.

Vahan Kololian: He is in the list of 10 largest shareholders of Lydian International. He is the founder of Terranova Partners (2004) and has also been in mining exploration business. On the charity hand, he is involved in the list of donors of UWC Dilijan college, IDeA foundation. Although he is not a board member of AGBU but cooperates with the latter, at least as a co-funder of projects.