“Oh, the road to having a son is very complicated…”

The results of a recent study conducted in 11 Armenian villages show that in Armenia, preference for boys over girls is one of the main factors contributing to the increase in sex-selective abortions. Ruzanna Tsaturyan, the author of the study, says in her report that in Armenia, there is still a widespread misconception that women alone are responsible for the sex of the future child, and therefore many women who have given birth to girls are often deemed as “lazy” and “ungainly.”

Many participants of the study, the report says, confirmed the widespread idea that Armenian men often feel ashamed about having a daughter:

“How could I have a daughter?” (a Gyumri man)

“My brother has three daughters. Before the birth of each of the child, my father would urge him to eat onions but he would refuse, saying it was disgusting. When his third daughter was born, my father told him, ‘Don’t you feel disgusted with yourself now that you have three daughters?’” (an Amasia man)

In Armenia, the desire to have a son is so great that at weddings brides are given boys to hold so that they have sons in the future. To find out the sex of the child, women still go to fortune tellers and even hold pilgrimages, the report says.

“Calculating” is also a common method of ensuring the birth of a son. There is even a Facebook page named “Sex Calculation” which offers its services in the matter of “family happiness.” 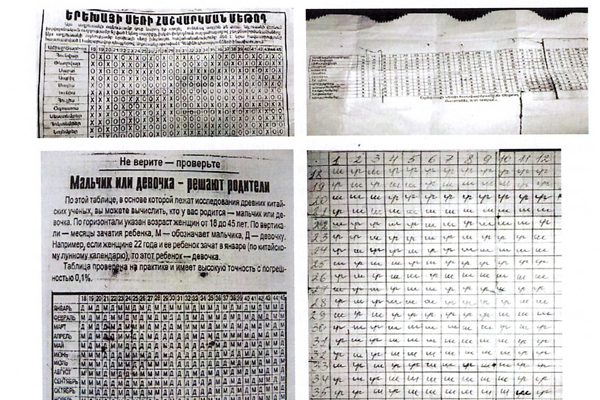 According to the study, in many regions of the country, pregnant women do not hurry to register with their physicians; “They wait silently for 10-12 weeks (after which women are allowed by the law to undergo a sex-selective abortion) to be able to find out the sex and only then announce the pregnancy.”

Sex-selective abortions are carried out in two ways: by women’s own means and with the help of doctors. In parallel with the increase in awareness, women are less likely to resort to home remedies for abortion, but there are also such cases. Among these home remedies are drinking tinctures of pepper with aspirin, eating 10 boiled eggs with the shell, lifting weights, and jumping from height.

The increase in public awareness and condemnation over sex-selective abortions, however, also has adverse effects, the study points out; “Families who, nevertheless, decide to get rid of a girl fetus try not to share this information with their neighbors, and as a result, the discussion of the phenomenon becomes more limited.”