15.33 At least 10 protesters suffered injuries after riot police used special means against the demonstrators on Baghramyan Avenue. One of the leaders of the movement MP Nikol Pashinyan is among those injured. 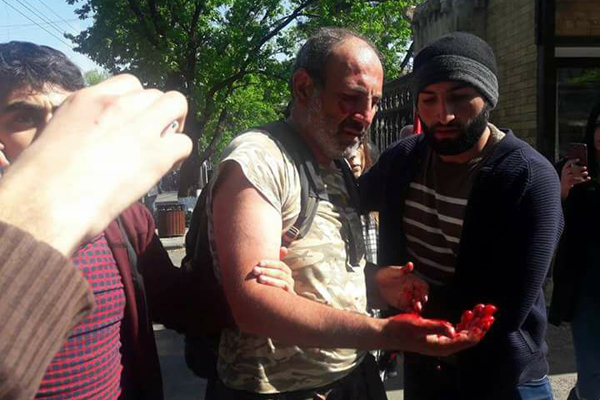 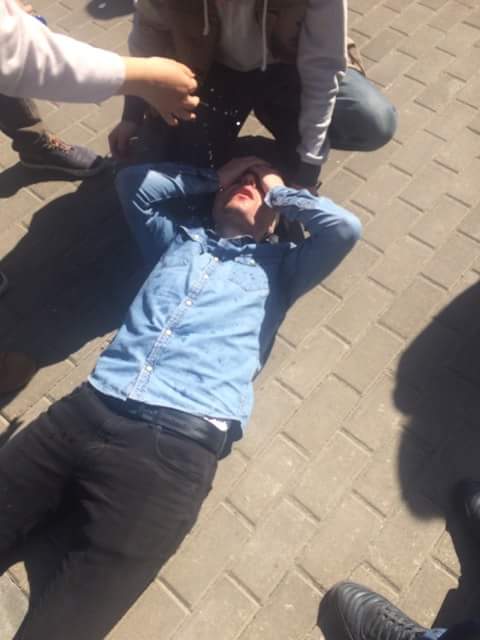 1:40pm: Minutes ago a Pajero car hit one of the demonstrators on the Khorenatsi-Mashtots intersection. The young man’s friend told our reporter that he is currently being transferred to a hospital by an ambulance. 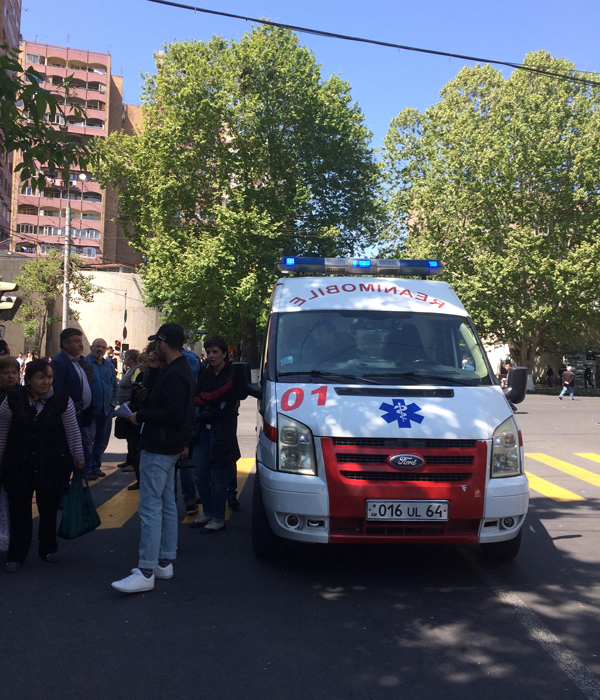 1:30pm: Thousands of demonstrators led by Nikol Pashinyan have reached the Baghramyan Avenue to be met with a police wall. Scores of police officers, however, have barricaded the entire area to prevent the demonstrators from approaching the National Assembly building and the presidential residence. 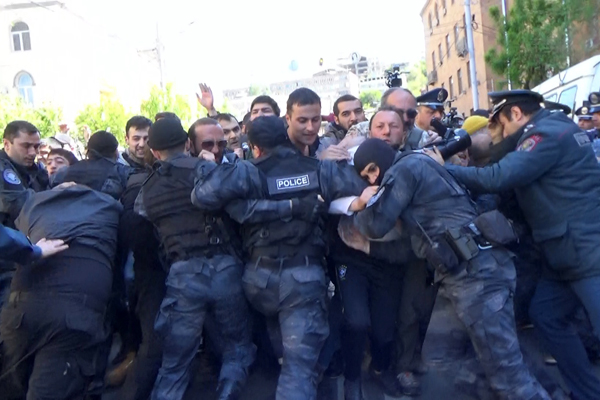 1pm: Republican Party lawmaker Vahram Baghdasaryan has told reporters that he did not believe the oppositionists would succeed in toppling the Prime Minister elections to be held in the Parliament on April 17. “The special session will take place, and the National Assembly will work until the agenda is complete. We have to be at the National Assembly at the start of our workday, and the relevant agencies have to ensure we have access to the building.”

Local human rights defenders are urging demonstrators to call their joint hotline in case of police violence or detentions:

12:40: Nikol Pashinyan and a thousand marchers have reached the Victory bridge.

Protesters from all over Yerevan have been warning their peers that there are plainclothes police officers disguised as drivers among the demonstrators and calling upon them to remain vigilant against any provocations.

12:15: Politk.am reports that the young people with the Mercedes Benz (license plate – 62ss465) who earlier attacked the demonstrators on Heratsi street are members of the youth branch of the Republican Party. The source says that the Republicans mostly probably attacked the students to provoke them into a clash.

11:40am: Nikol Pashinyan is leading thousands of people through the streets of Yerevan and to a number of educational institutions to check whether any students have been trapped inside. A few minutes ago the demonstrators penetrated into the Pedagogical University. 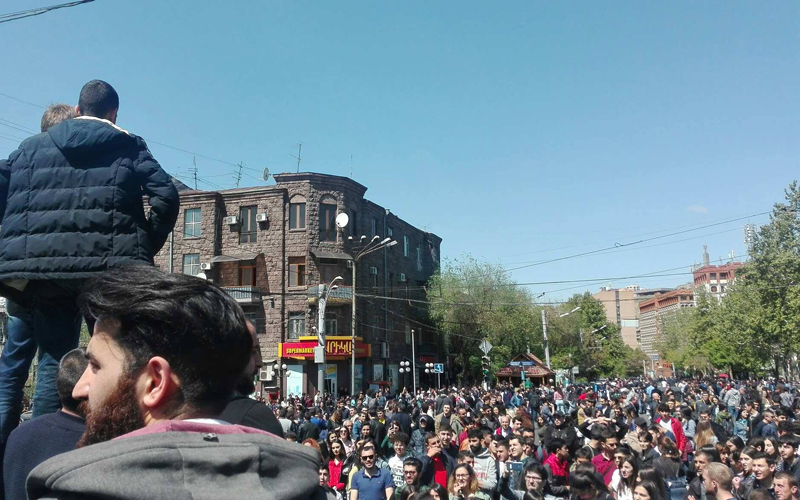 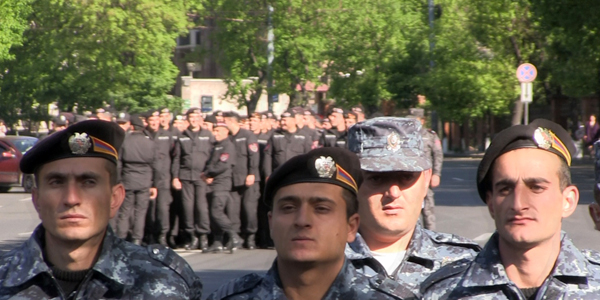 11:30am: A group of demonstrators just blocked the Nalbandyan-Khanjyan intersection. 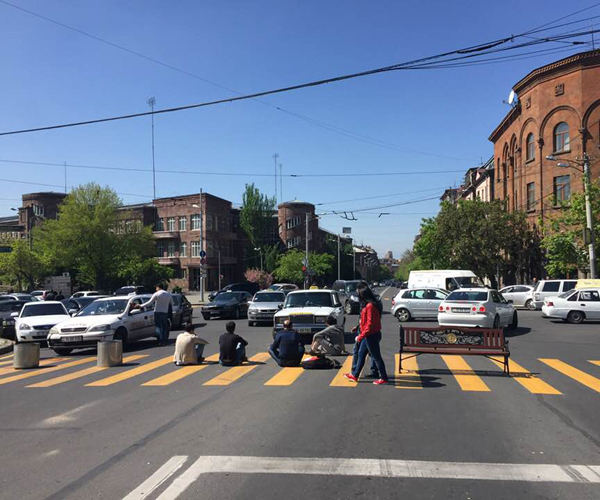 10:50am: Police officers forcibly removed the demonstrators from the Heratsi-Charents intersection and blocked off the road leading to Heratsi street. A group of protesters led by Nikol Pashinyan arrived here shortly and broke through the police wall, chanting “Police are ours.” Naarly thousand of demonstrators have begun marching towards the central police station. They are holding their hands up to show that they are unarmed. Police have been trying and failing to block their movement.

10:35am: Police officers are trying to detain  five people from the Orbeli-Baghramyan intersection. They have put the group into a police van, but other demonstrators are refusing to let the van move.

10:30am: The number of demonstrators currently out on Yerevan streets reaches several thousand.

10:27am: Prominent civil activist Vardges Gaspari has come to the Proshyan-Demirchyan intersection, holding a poster that reads, “Serzhik, murderer, Serzhik, bastard.” The intersection has been blocked off by police officers.

10:25am: Nikol Pashinyan is calling upon large businessman not to allow their security guards to intervene in the demonstrators activities.

10:17am: A group of young men came out of a Mercedes Benz car and attacked some of the students blocking the Heratsi street. The car subsequently drew through the student wall. Police officers present at the scene did nothing to stop violence against the students. Nonetheless, the demonstrators have already managed to re-block the street.

10:05am: Baghramyan, Myasnikyan, Arshakunyats and Mashtots avenues, as well as Amiryan, Saryan, Abovyan and Demirchyan streets are blocked at the moment.

10am: YSU Restart initiative members Davit Petrosyan has announced that the occupied area near the Medical University “is not the students’ territory.” He has urged the university professors to join their strike and discussions.

9:35am: Nikol Pashinyan is urging drivers on Khanjyan street to turn off their cars in the middle of the street to paralyze traffic. Lawmaker Ararat Mirzoyan, along with a group of demonstrators, has blocked the Amiryan-Mashtots intersection. 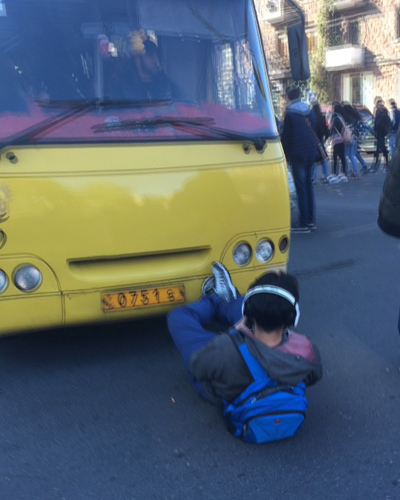 9am: Nikol Pashinyan remains on Baghramyan Avenue. A flipped-over car has blocked the entrance to the avenue. A little further up, the road leading to the National Assembly building has been blocked by police officers.

8:58am: Police officers took away the passport of one of the drivers parked nearby the Medical University and then forced him to leave the area.

8:51am: Two drivers lefts their cars next to the Yeritasardakan metro station and joined the striking students.

8:44am: The Marshal Baghramyan metro station has also been shut down; a sign on the entrance door apologizes for the inconvenience and says the station is closed due to technical issues. Prior to that, a group of activists tried to paralyze the metro line by lying down in between train doors and not letting it move. Police officers forcefully removed the activists from the area and began closing down the stations. 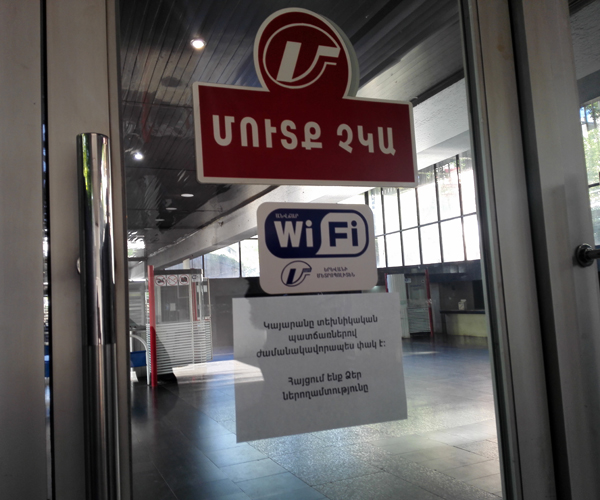 8:39am: Police have shut down the Republic Square metro station; people are not allowed in; there are no travel coins for sale, Epress.am correspondent reports.

8:29am: A group of students has blocked the Abovyan street, not far from the Yeritasardakan metro station. They are calling for people to boycott classes and work.

8:23am: Police forces are bringing barricades to the are around the presidential residence. The street, however, has yet to be blocked, our reporter tells us. 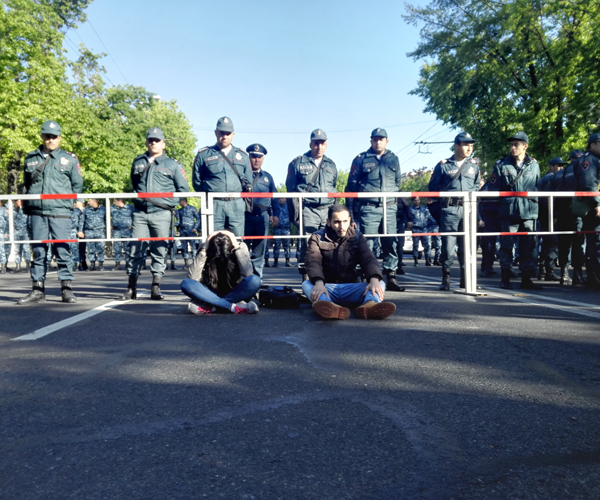 8:20am: Pashinyan’s supporters are moving street benched to the entrance of Baghramyan Avenue in order to block off traffic.

8am: Prominent oppositionist Yelk bloc leader Nikol Pashinyan blocked the way of a civilian bus on the central Baghramyan Avenue at 8am straight, apologizing to the passengers for the possible inconvenience and saying that he was carrying out a political action.