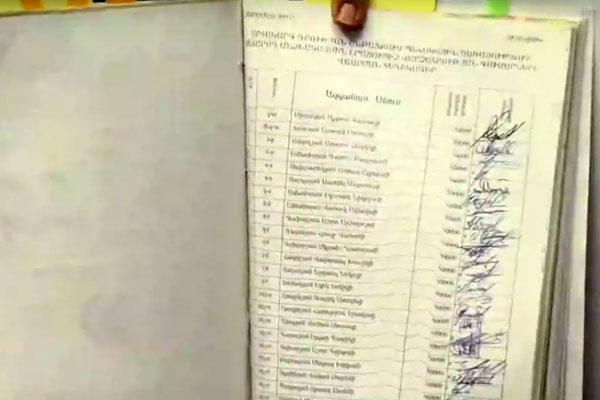 “After discovering the 0038 strictly confidential order, it was further discovered that the army had participated in the events and the participation was confirmed to have started on February 23, 2008. This was a day that preceded the official announcement of election results. It turns out that Robert Kocharyan and Mikayel Haroutyunyan were aware that the Central Electoral Committee would declare Serzh Sargsyan the winning candidate and they signed an order whereby the army was brought to an alert state and the peaceful protests were to be prevented.

․․. They were saying that the army did not participate in March 1st and was only ordered to an alert state.

Our investigation has already found out hat not only did the army participate in the March 1st operations, but the army also opened fire at people’s apartments. We have evidence that the military servicemen of the Defense Forces of Armenia shot from gun machines at the balconies of Leo apartment buildings after a Molotov cocktail was thrown from one of the balconies. In other words, the army participated in the operations in full scale.

This is an important disclosure that I resisted to do, however now there is an occasion to do so.

After releasing this confidential order, it was decided to mobilize military soldiers from various units of the country in Yerevan.

The soldiers who guard the borders had to continue guarding without any shift turns. Very dangerous situations emerged back then, there were even infiltrations. This is confirmed in the materials of the criminal case. This did impact the combat readiness of the army.

The most shameful thing that was done to our army was to turn our army soldiers into mercenaries. This was confirmed in the criminal case”, said Khachatryan.

The head of the Special Investigative Service also disclosed an original copy of a document, a log where military servicemen signed for having received money.

“During this period, from February 23 to March 8, the oligarchs distributed money in order to have their property and political aspirations protected.

The log specifies the names of the military and the financial amounts received by them, there are signatures by the servicemen and their commanders. The money was cashed from the bank accounts of oligarchs and officials,” said the head of the Special Investigative Service.

He promised to disclose from whose accounts these payments were cashed and highlighted that around 180 mln AMD was distributed.

Khachatryan made one more important disclosure related to the March 1st case.

“The circumstances under which Tigran Abgaryan’s, servicemen of internal armed forces, death occurred are more than fuzzy. We have conducted quite a lot of work in this regard and can state today that Abgaryan was killed by the special forces. We have clear evidence regarding this. In other words, what does this lead to? Abgaryan was killed at a time when Kocharyan had already declared a state of emergency, however at the moment of declaring a state of emergency there was no military serviceman that was gunshot. Our version is that a gunshot was inflicted upon Tigran Abgaryan in order for Kocharyan’s statement that “we already have casualties” to be justified. The pretrial investigation has already confirmed this. This news is sufficient for a true manhunt to be initiated against me and Mr. Vanetsyan,” said Khachatryan.

He also addressed the rumors that on March 1st of 2008, the private bodyguards of the oligarchs were distributed bulletproof vests.

“The evidence collected for this criminal case shows that this was a reality. A large amount of military vests were discharged from the warehouses of the Defense Ministry and were distributed to the private bodyguards of the oligarchs. Who exactly were they distributed to will become clear at the end of the pretrial investigation. Why were they distributed? … In order for them not to be differentiated from the military and to incite provocations,” concluded Khachatryan.