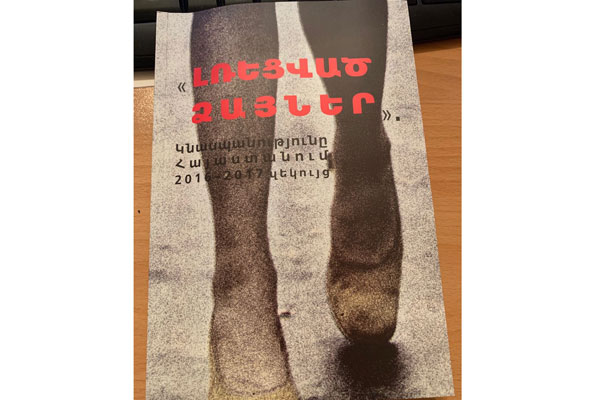 “I compare femicide with genocide given the context in which it takes place: this is an act against an entire group, large segment of the society rooted in the belief that this segment is worthless, inferior and therefore the act is permissible.”

“We researched 12 cases of femicide committed in 2016 and 2017 in Armenia. There were of course many more cases, however we were not able to find official information on them,” says Stella Chandiryan to Epress.am, co-author of the “Silenced Voices: Femicide in Armenia” report commissioned by the Coalition to Stop Violence Against Women.

“I am confident that there are many more cases. A lot of cases are closed or no criminal proceedings are initiated, there were cases which were inaccessible to us, we also did not research an entire database in pre-trial investigation.”

Femicide is the killings of women based on misogyny. Femicide is a kind of crime that is apoliticized by the patriarchal system and is described as a crime committed by crazy people. As a consequence, many crime perpetrators do not receive a punishment commensurate to the committed crime.  Silenced Voices: Femicide in Armenia

The report presents 12 cases of femicide, an overview of their trial and the judgement of the court.

“In every and each of these cases the court did not examine the situation preceding the crime or violence. No case investigated that the victim woman was perpetually subjected to domestic violence, there is not at all any discussion of domestic violence during trial and court judgement. The court investigates the case squarely within the frames of the law. As for mitigating circumstances, the law says that you can consider such circumstances. What is strange is that in such cases it occurred to the judges to apply mitigating circumstances,” notes Chandiryan.

One of the noteworthy cases presented in the report is Alina M.’s murder. During an argument sparked by his jealousy, Aram M., Alina M’s husband, stabbed his wife with the kitchen knife on November 25, 2016.

The court ruled to that Aram M. was guilty in the crime punishable by Article 112, Part 2, Clause 14 of the Criminal Code of Armenia, which is about maliciously inflicting severe harm to the health of a person which has incautiously lead to death. The sanction applied was 6 years 8 months of imprisonment. The court mitigated Aram M’s liability and punishment by considering the circumstances that he pleaded guilty, supported uncovering the crime, had a dependent father with disability.

It is noteworthy that state institutions that deal with investigation and trial of femicide cases do not attribute homicide of women at home or outside the family the quality of femicide, they do not investigate its root causes and do not have a unified information database that can serve as a basis for research. Silenced Voices: Femicide in Armenia

Stella Chandiryan links this approach of judges to the education system. She is a lawyer herself and remembers that during her studies she and her peers had never heard of the term “femicide.”

In order to eradicate the root causes of femicide, it should be borne in mind that femicide is a political crime that demands universal recognition and systemic response. It is very important to address its real roots and to start off from the idea that femicide is an extreme form of applying power over the life and body of a woman. Silenced Voices: Femicide in Armenia

“Silenced Voices” reports that trial practice in Armenia shows that courts, in their examination of domestic violence cases, do not consider the situation preceding the crime, the motive of the crime, the level of the crime’s or offender’s dangerousness for the society. Trial investigations not bring out factors aggravating an offender’s liability and punishment in cases of domestic violence and femicide, even the description of commission of apparent violence is not viewed as violence against a woman, instead the judicial decisions describe the situation with euphemisms, such as “quarrel,” “obscene acts” etc.

The Criminal Code of Armenia does not lay out special provisions for abuse of women. Violence against women or domestic violence is not defined in any way, no provisions are set that would take into consideration the gender of the victim and the relationship between the victim and the perpetrator.

The authors of the report propose to criminalize domestic violence as a separate offence. They also propose to add new circumstances as factors aggravating criminal liability and punishment in the respective list set out in Part 1 of Article 63 of the RA Criminal Code, including, among others, commission of crimes against wife/husband, partners, other family members or cohabitating persons.