In Artsakh, Armenians Defend Their Revolution Protesters participate in the ‘Velvet Revolution’ in Armenia in April 2018. Photo: Narek Aleksanyan

YEREVAN – Armenia, one of the few nations to overthrow a corrupt ruling elite and embark on the process of democratization in the past decade, now risks losing the gains of its “Velvet Revolution” to an Azerbaijani-Turkish territorial assault.

Armenia’s revolution of 2018 was neither globally acknowledged nor championed by Western democracies, which normally favor democratic regime change in post-Soviet countries. But small states struggling for sovereignty and democratic regime change should take note of the struggle of Armenia today, as the autocratic leader of Azerbaijan speaks openly about his desire for Armenia’s return to its old corrupt regime.

On September 27, as Armenia was pressing ahead with the reconstruction of its social and political institutions in the midst of a global pandemic, Azerbaijan launched an offensive unprecedented since the 1990s aimed at seizing the ethnic-Armenian enclave of Nagorno-Karabakh, known to Armenians as Artsakh.

In the last 25 years, hostilities of varied intensity have periodically broken out between Armenia and Azerbaijan, with the specter of a large-scale war haunting both countries. In April 2016, the two Caucasus republics faced each other during a four-day war that resulted in dozens of casualties on both sides. And in July of this year, Azerbaijan directly threatened the borders of the sovereign Armenian state.

This time, it quickly became clear that this was not one of the business-as-usual clashes to which the two sides have been accustomed since the 1994 ceasefire.

The arsenal deployed by Azerbaijan was unprecedented: unmanned drones, ballistic missiles such as multiple launch and self-propelled rocket systems, as well as US-made F-16 fighter planes from the Turkish Air Force, according to reliable reports. Some of these weapons such as the Israeli LORA ballistic missile are being “tested” for the first time ever.

That the war was reaching unprecedented dimensions has been confirmed, as Syrian mercenaries have been transported to Azerbaijan and sent to the Azerbaijani front lines. A number of countries with the resources to verify this – Russia, France and the US – acknowledged that fact.

The Armenian side also claimed it had evidence that the Azerbaijani Air Forces jet fighters involved in the military operations had been placed directly under the command of officers from Turkey.

Armenia reacted swiftly and decisively to the violation of the ceasefire by declaring martial law in the country and instituted general mobilization.

Yet Armenia’s strategic partner, Russia, which has military bases in the west and south of the country, has not acted in Armenia’s defense. Western countries, including those involved in the international mediation process, released general and ineffective statements that called upon the sides to halt the military operations.

As Azerbaijan undertook the intense shelling of civilian settlements and Nagorno-Karabakh’s capital Stepanakert, Armenians saw that the very right to survival of Karabakh Armenians was at stake.

For a nation that survived the first genocide of the 20th century at the hands of Turkey, the direct involvement of the latter in the conflict had frightening reverberations. Armenians yet again directed their attention to their precarious place on the map between two Turkic nations, especially given the identification of Turkey and Azerbaijan on ethnic grounds.

What awaits them, should they be defeated, is ethnic cleansing. The authoritarian regime of Azerbaijan has fed its people militaristic, hate-filled rhetoric as a means of quieting possible domestic strife while amassing extreme wealth through petrodollars.

The conflict has wider, regional and international implications; its geopolitical dimensions are becoming increasingly manifest within the context of Turkey’s most recent aggressive meddling in the Eastern Mediterranean and Aegean seas, the Middle East in general, as well as in Libya.

Nevertheless, the questions still emerge: Why now? Why launch a large-scale war in the midst of a global pandemic? Why has Russia issued only vague statements as Turkey threatens an area traditionally within its zone of direct influence?

The answer should be sought in the recent political and social processes in Armenia in the wake of the successful 2018 revolution. 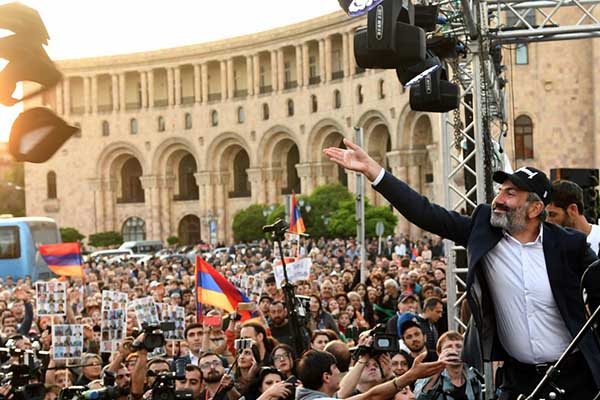 Nikol Pashinyan, then the Armenian opposition leader and now prime minister, waves to supporters at a rally in Yerevan on April 30, 2018, during the ‘Velvet Revolution.’ Photo: Vano Shlamov / AFP

That revolution brought a democratically elected leader, Nikol Pashinyan, and his party to power with unprecedented popular support. As one of the few, if not the only, revolutions in the last decade that reached its goal of regime change, and did so peacefully, the Velvet Revolution got rid of the oligarchic elite that had been holding the country hostage through rigged elections and mafia-style politics of governance.

The Velvet Revolution was neither a “color revolution” supported by the West or “Soros,” the scarecrow that the authoritarian regimes in the post-Soviet sphere have constructed as the epitome of espionage, immorality and so on, nor a coup sponsored by some third country. This is largely the reason Western democracies did not embrace it, let alone champion it.

For the Armenians, the 2018 revolution revived hopes for relative political sovereignty in a region often ruled by authoritarian and anti-democratic oligarchs.

Pashinyan’s first visit outside the country after assuming the position of prime minister was to Moscow to reaffirm Armenia’s strategic partnership with Russia. At the same time, he undertook measures to strengthen Armenia’s ties with the European Union. Most significantly, Pashinyan deepened Armenia’s commitment to protect the rights of ethnic, national, religious and sexual minorities.

Nevertheless, for Russia, Azerbaijan and Turkey, Pashinyan was far from being a dream partner. The previous Armenian regime of oligarchs and authoritarian rulers – former presidents Robert Kocharyan and Serzh Sargsyan – were far better partners for them, because they were complicit in holding the nation hostage through the specter of the war.

In an interview with the Qatari broadcaster Al Jazeera on October 2, Azerbaijani President Ilham Aliyev explicitly confirmed that his government “had a process” with the previous Armenian regime in terms of negotiations and openly accused the current government of being a dictatorship and for putting the former presidents Kocharyan and Sargsyan under criminal investigation.

But in Armenia, it is those former presidents who are seen as the dictators.

Kocharyan stands accused of overturning the constitutional order in 2008 and for deploying the army and killing protesters.

The ancien régime in Armenia and the ruling oligarchy in Azerbaijan have entered, if unwittingly, an unholy alliance against a nascent democracy brought about by the revolution.

From this perspective, the ongoing war is not simply an ethnic or territorial conflict, but a threat to the democratization processes in Armenia and, for Armenians, a struggle to defend the legacy of the revolution from external threat. The success of protecting this fragile democracy is not simply a political issue but also an existential question of survival, and it weighs heavily on the shoulders of the young generation of the 2000s. 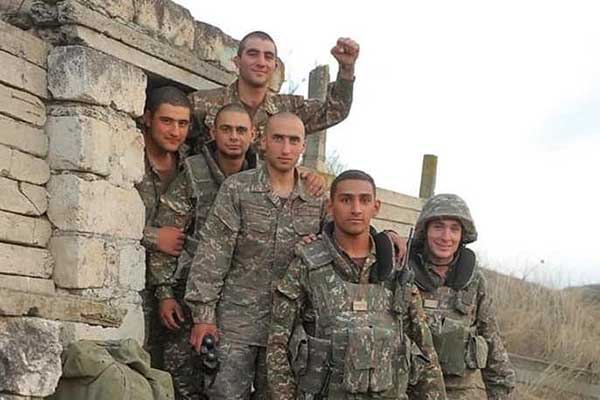 In his book Who Made the Revolution (2019), art historian Vardan Azatyan offers a cultural analysis of those Armenian young people who brought about the revolution. According to Azatyan, the generation of the 2000s was the engine of the 2018 protests.

These teenagers had no elaborate political or ideological agenda for Armenia’s future from which they launched their challenge to the established order. In their schools they were directly exposed to the arbitrariness and machinations of the former regime serving as strongholds of state corruption, and the revolution was their chance for retribution and transgression.

Azatyan claims that it was against this psychological background that they took obvious pleasure in directly participating in public life, in feeling their own importance reinforced by the desire for visibility, a desire that was not concealed behind the political mores and positioning of an adult.

The revolutionary processes had suspended the monopoly of the “adults” over the mastery of the social world, and the youthful enthusiasm for play, showing off, audacity and agility had taken over the streets of Yerevan shattering the foundations of the ruling order.

“These good-humored and sharp-minded little ‘supermen’ and ‘wonder women’ who have been cultivated through smartphones, computer games and social media brought to the street their attentiveness and a dynamic mode of social interactions that ensured the success of the revolution,” Azatyan writes.

“This new subjectivity was also shaped by the mass media of the mid-2000s that through Cars, Transformers and cult films that integrated high technologies and human heroism. As the humanized racing car Lightning McQueen endowed with the sympathetic features of a teenager would say, ‘I am a precision instrument of speed and aerodynamics.’”

Now they were deploying this speed and dynamism – as well as the economy of attention that characterized the modus operandi of this generation – in the war, as the continuation of their revolution.

The Armenian Ministry of Defense has been publishing the names and the years of birth of the soldiers who have died since the beginning of this war: The majority were born in 2000-2001. It is precisely these youths who are of an age to be recruited to the army that now carries the main burden of defending on the ground the self-determination of the people of Artsakh and Armenia’s bid for some form of political sovereignty, which was one of the key political aims of the revolution.

Denying this aim, both Turkey and Azerbaijan have been hypocritically calling on the Armenian people to topple their regime while the international community has been equating the political regimes in Armenia and Azerbaijan as one and the same. Such abstract sloganeering misses the concrete case of the success of the revolution in Armenia and the establishment of the democratically elected popular government.

Since the revolution, this government has been working on returning the stolen assets of the people by the old regime, implementing projects of fostering social welfare, reforming public education and, more generally, launching Armenia on the path of re-modernization.

What is under threat now is precisely this path: the belief that a small country can rely on itself to acquire a modicum of political sovereignty and achieve peaceful co-existence in a region where national questions have been enmeshed in the dynamics of political and cultural interests of the dominant powers.

ANGELA HARUTYUNYAN
Dr Angela Harutyunyan is an art historian and chairwoman of the Department of Fine Arts and Art History at the American University of Beirut.

23.06.2011
From Cultural Politics to the Politics of Pure Representation: The Armenian Pavilion in Venice