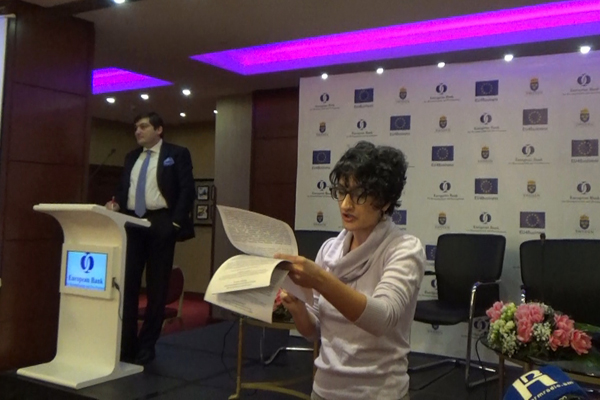 Representatives of the European Bank for Reconstruction and Development (EBRD), the European Union (EU) and the Swedish parliament today presented their joint programme Women in Business at Armenia Marriott Hotel aimed at providing finance and advice to women-led small and medium-sized enterprises in Armenia. Yerevan-based activist Anna Shahnazaryan thwarted the event to raise the issue of EBRD’s financing of the Amulsar gold mine exploitation and its consequences. Ameriabank, which is involved in Women in Business as a local lender, is also among the sponsors of the Amulsar Gold Project.

Shahnazaryan caught the presenters off guard when she approached the rostrum and gave them condoms. Then the activist proceeded to talk about the true “benefits” of the Amulsar project on behalf of the Armenian Environmental Front (AEF), a group of environmental activists who have been fighting the mine exploitation for years.

“The banking organizations gathered here say they have supposedly launched a programme beneficial for women. However, that’s hypocrisy, since organizations that have initiated this event also finance one of the most dangerous mining projects in Armenia – the Amulsar Gold Project – which negatively affects women in particular. After the opening of the mine, there will be a 70 percent influx of men [to Jermuk], which will in turn lead to changes in the population structure. Women will lose their jobs, and Jermuk will turn into a mining camp. Women will be driven into poverty and will be forced to make a living by prostitution. They have gathered here and are speaking alluringly about how they plan to provide [women entrepreneurs] with loans, but in fact they are causing enormous harm to women with their other programmes. Under this veil, they are carrying out the most disastrous [mining project],” Shahnazaryan said.

Note, the offshore-registered Lydian International, with the financing of the EBRD and the World Bank, has explored the gold reserves at the Amulsar mine neighboring Jermuk and plans to carry out an open-pit mining operation there. Local environmentalists have been fighting against the exploitation project for years, arguing that it will cause irreparable damage to the natural environment of Syunik, Vayots Dzor and Gegharkunik provinces.

Shahnazaryan handing out condoms to the sponsors of the project was a response to a provision in the program presented by Lydian, according to which, the mining company intends to distribute condoms among the miners in Jermuk to reduce the population’s risk of getting STIs. 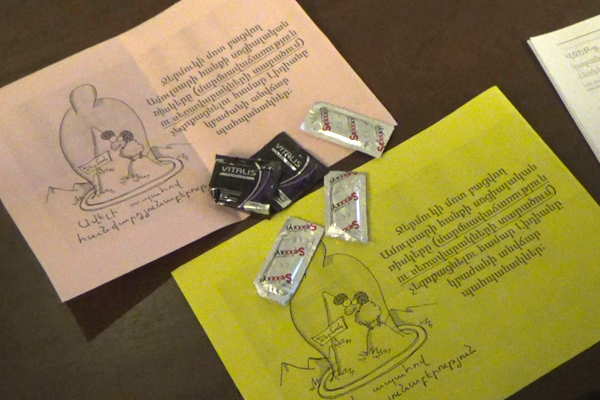