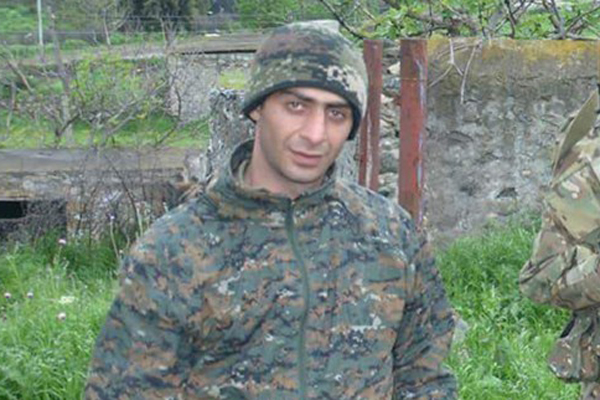 Captain Andranik Mkrtchyan, a soldier who fought in the April 2016 “four-day war” in Karabakh, was subjected to violence before his death. The fact of violence has been confirmed by the conclusion of a forensic examination. The examination found 10 injuries on Mkrtchyan’s body – scratches and hemorrhages, caused by a blunt item and, according to the forensic doctor, the injuries had been caused at least 3-5 days before the soldier’s death, Forrights.am reports.

Read the original article originally published in ForRights below:

“The forensic doctor does not specify when exactly the injuries were caused; he says maximum a day, i.e. 24 hours before death, but we see that the deceased was in a permanent conflict before his death with still unknown people. The doctor’s statement “up to one day before death” means that Andranik Mkrtchyan could get those injuries just on the day of his death, minutes before it,” independent expert Ruben Martirosyan states.

The day preceding his death, Andranik spent in Aparan, surrounded with his relatives and friends. Just before going to his military unit, he visited the hospital to call on his friends who had suffered a mine explosion, and his girlfriend was with him. There is no evidence that Andranik was subjected to violence at home or on his way back to his military unit. All the time he spoke to his relatives: in other words, he received bodily injuries in the military unit, before his death.

The body of Captain Andranik Mkrtchyan, an officer of the Meghri military unit and intelligence commander, was found on August 20, 2017 in one of the company’s rooms. His death was qualified as suicide and the criminal case was brought under Article 110 of the Criminal Code on inflicting suicide. About four months have passed since Andranik Mkrtchyan`s death, but there are no detainees, no suspects.

As a reminder: the suicide was stated first by the high commanders of the military unit when Andranik`s relatives came to the unit the same day they got the disastrous news. Commander of the military unit Karen Sedrakyan has advised them to look for the causes of death outside the military unit, despite the fact that the body of Andranik was found inside the unit.

The preliminary investigation body is trying to present as an evidence for suicide a note attached to the case that allegedly was written by Andranik before his death. The designated handwriting expertise confirmed that it was the handwriting of Andranik, but his relatives and friends, as well as Andranik`s existing handwritings manifest that it could not be written by Andranik.

“This is scribbled by an unknown person. At that moment, when there was no expertise of the weapon, nor expertise of Andranik`s clothes, the forensic examination was already ready. This shows the interest of investigators and their superiors in this case,” says Ruben Martirosyan, pointing out another, a more important circumstance.

The expert notes that the pen, the ink, by which the note was written, has not been found in Andranik’s room. This means that Andranik could not write that note.”

It should also be added that the investigation body examined the case of violent death for 2 months, but Andranik Mkrtchyan was not recognized as a victim and his father was not recognized as the victim`s successor. Also, according to the law, the preliminary investigation body was obliged to provide copies of all decisions to the victim’s side, but that too was not done in time. Some documents have been provided only after the victim`s representative has requested them, but still not all the documents.

“From the very first day, the preliminary investigation body qualified the assassination as a suicide and is taking all unlawful actions to prove that it was a suicide,” says Ruben Martirosyan.