Shatin village of the enlarged community cluster called Yeghegis of Vayots Dzor marz stood up to defend community rights still in May of this year. They have blocked roads with a demand that the head of the community, Artur Stepanyan, resign, they have also occupied the entrances to the municipal building. Head of community Stepanyan left the community and currently “sits” in Taratumb, one of the smaller villages of the enlarged cluster of communities. The work of the municipality is effectually paralyzed, as the building of the municipality is blocked for almost 3 months, however the demands of the protesters continue to remain without a response. At Epress.am’s visit to the village, about two dozen men were gathered at the municipality and were actively discussing the processes of their resistance under a banner titled “Artur, Resign!” This is not the only banner, next to it is another large one titled “List of Shareholders of the Head of Yeghegis Community.” Number one in the list is army general Hovik Ohanyan, who Shatin villagers believe owns 51 percent of “shares,” second comes Zoya Martirosyan, village doctor, then Sergey Bagratyan, an MP. Artur Stepanyan himself owns only 6 percent of “shares” in the post of the head of community, according to Shatin villagers. 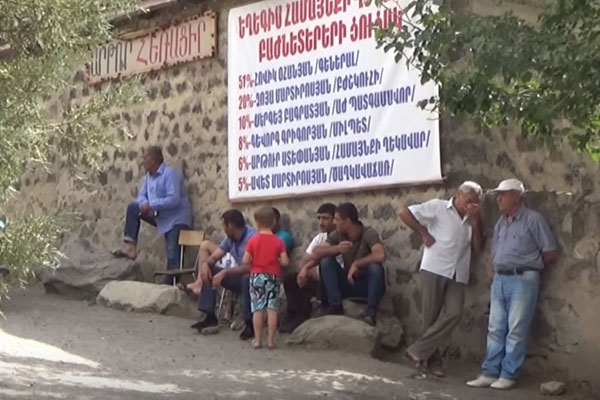 Shatin community members have many complaints and as is the case with many communities, they either were not able to voice their grievances during the rule of the previous authorities, or were repressed for voicing or complaining. They say that nobody asked their opinion whether or not to cluster 12 villages into one community, while according to them a more reasonable approach would have been a 6/6 approach. There is no inter-community transportation, no events to tie the communities together, they were even unable to have a kindergarten open in the village. The blame for this is particularly placed in Artur Stepanyan, while the clustering of communities is a disaster according to them.

For Shatin residents municipal elections have been one of the most painful issues. After community clustering, there were 4 candidates at the enlarged community elections of November 5th, 2017 and the real contest was between former head of community Tigran Khudoyan and Artur Stepanyan, winning candidate. Shatin, the largest village of the cluster, mainly voted for Khudoyan, while the smaller villages were united around Artur Stepanyan. Shatin residents claim that the elections were not fair, the promoters of Stepanyan, including army General Hovik Ohanyan and Sergey Bagratyan of the Tsarutkyan political coalition in the parliament, seemed to have been more powerful and were able to promote Artur Stepanyan to the post. 1952 votes were given to him against 1816 votes for Tigran Khudoyan. Discussions around Khudoyan emphasize that while he held the previous post of municipal leader for only a few months, the community felt the positive impact of his work. Now Shatin residents are demanding new elections regardless of who will be elected in a fair contest.

In a conversation with us, farmer Tigran Yeghoyan claimed that Shatin residents will go all the way until the end in order to have Arates resettled. The territory of Arates that was under the control of the Ministry of Defense was de facto under the possession of General Hovik Ohanyan, who, according to Yeghoyan, would not allow anyone enter or exit that area. Even gathering herbs was something forbidden there. In the summer of this year “Mkhitar Sebastatsi” school commenced reconstruction activities for a summer-school center in Arates, however Shatin residents are against this too. They claim that they need to use the land of this area for agricultural purposes, namely, to engage in bee-keeping here. Yeghoyan mentions that certain media disseminated false information that it is just him who wishes to use the lands of Arates and thus this is his motivation in the fight for resettling Arates, however this is false information according to him. Yeghoyan insists that Arates must be used by all the community and he fights together with the rest for this very purpose.

Small hydro power plants occupy almost all Yeghegis river. In many parts the river has almost dried out as the water is drained into pipes. There are currently 17 small hydro power plants on Yeghegis river, while several others are under construction. Residents of Yeghegis link their economic issues mainly with the small hydros. These give no benefit to the communities, all the profits are drained into the pockets of private owners, the area undergoes an intensified process of desertification because of lack of water, many orchards are drying. The small hydro power plants are owned by high profile people or officials. Yeghoyan names a few of them: Sashik Sargsyan, brother of the former President Serzh Sargsyan; Hovik Ohanyan, army General; Aghvan Hovsepyan, former Prosecutor in Chief, then head of the Investigative Committee who registered the hydro power plant by his son’s name; Father Abraham, head of the Vayots Dzor Diocese of the Armenian Apostolic Church.

Environmentalist Anna Shahnazaryan claims that in the name of energy sector’s diversification in the past 10 years small hydro power plants have surged in all over Armenia. According to her, this processes follows a purely business logic, while its social and environmental consequences have been completely neglected by the previous government.

“Once the very first small hydro power plants were built on Yeghegis river, there was already a lot of criticism, a lot of damage was done to the residents of Shatin. They have been constantly complaining, however no remedy to the situation, no regulatory norms were adopted. 17 SHPPs have already been built, several others are in the pipeline,” says Anna Shahnazaryan.

“The new government needs to respond to the situation at Shatin without any further delay,” concludes Anna Shahnazaryan.