Home / Armenia / ALLY OR TERRORIST? ARMENIANS DEMONSTRATE AGAINST PUTIN AMIDST HIS VISIT TO YEREVAN

ALLY OR TERRORIST? ARMENIANS DEMONSTRATE AGAINST PUTIN AMIDST HIS VISIT TO YEREVAN

November, 23 – Vladimir Putin visits Armenian capital Yerevan to attend a yearly summit of the Moscow-led Collective Security Treaty Organization (CSTO), currently chaired by Armenian Prime Minister Nikol Pashinyan. The summit takes place in the atmosphere of a lasting disappointment after the CSTO alliance denied Armenian call for support during September attacks by Azerbaijan on the territory of Armenia proper. This last escalation of the conflict between Armenia and Azerbaijan, the biggest one since the ceasefire in 2020, has claimed almost 300 lives.

According to Article 4 of the Collective Security Treaty, aggression towards any of the member states is considered as aggression against all States Parties to the Treaty. Despite that, no military assistance by the CSTO has been provided to Armenia.

Yerevan hosts the Russian President alongside other CSTO member countries’ representatives –  Belarusian President Alexander Lukashenko, Kazakh President Kassym Jomart Tokayev, Kyrgyz President Sadyr Japarov and Tajik President Emomali Rahmon. The visit to Armenia, which is the only democratic country in the alliance, counts for Putin’s 6th foreign visit since the start of the invasion of Ukraine – the five others being Tajikistan, Turkmenistan, Uzbekistan, Kazakhstan and Iran. Alongside the official reception by the Armenian government, his arrival to Yerevan is met with public protests.

On the evening of Putin’s arrival to Armenia, a demonstration organized by the National Democratic Pole alliance took place, protesting against Vladimir Putin and the CSTO alliance.

Another civil protest took place on the day of the summit. In the center of Yerevan, more than a thousand people gathered to demonstrate their disagreement with the Russian influence in Armenia and with Armenian membership in the CSTO – among them not only Armenians, but also Ukrainian and Russian citizens, who both left their homelands after February 24th, when the invasion of Ukraine started. Armenian, Ukrainian, European and American flags were visible side by side with slogans “Russia is a terrorist state”, “Putin is a killer” or “CSTO is killing our soldiers.” 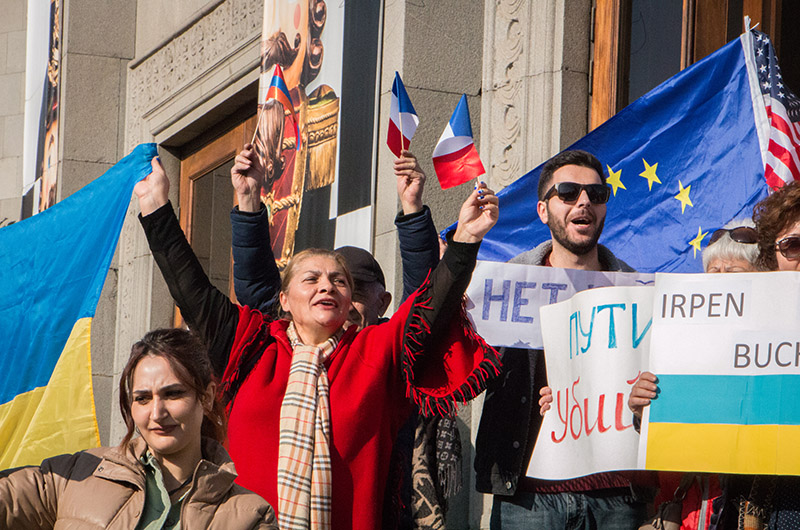 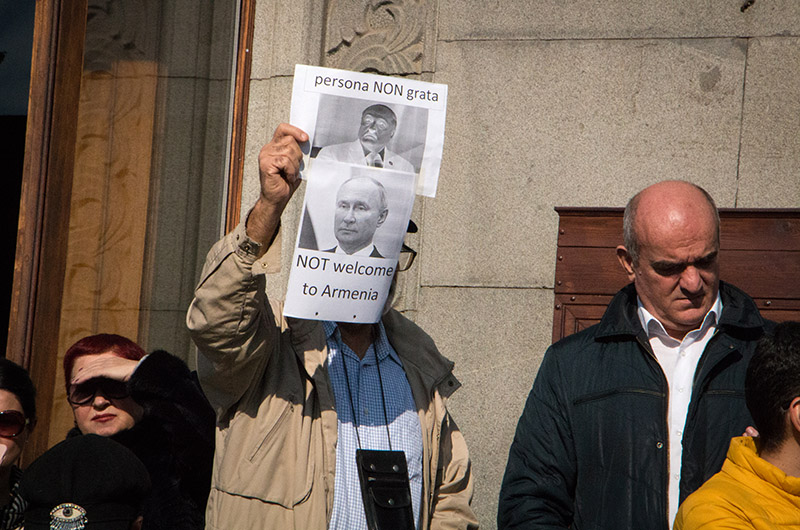 Stepan Grigoryan, head of Yerevan-based Analytical Centre on Globalization and Regional Cooperation and one of the speakers on the demonstration, stated: “For 30 years, in all international meetings we have been standing and voting for Russian interests, hoping to get defense and security guarantees. Meanwhile, Russia doesn’t care about its partner’s interests, and is even supporting countries like Turkey and Azerbaijan, who openly attack us.” 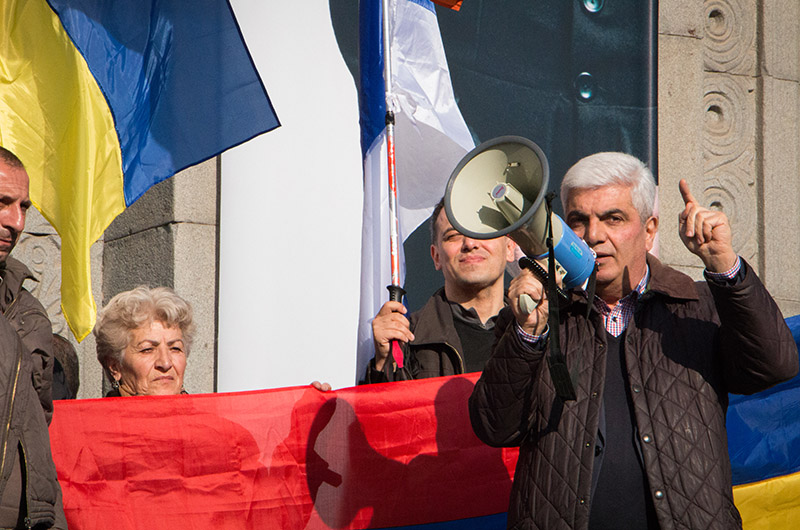 “We came because we also disagree with Putin’s politics and with the war in Ukraine,” says Dimitri, 27, who came to Armenia from Russia in September. “It is good to see that here, you can express your opinion freely. In Russia, demonstrations like this would not be possible. Unlike in Russia, the policemen here are showing their faces and protecting this gathering. Back home, they would wear helmets and not allow us to speak up freely.” 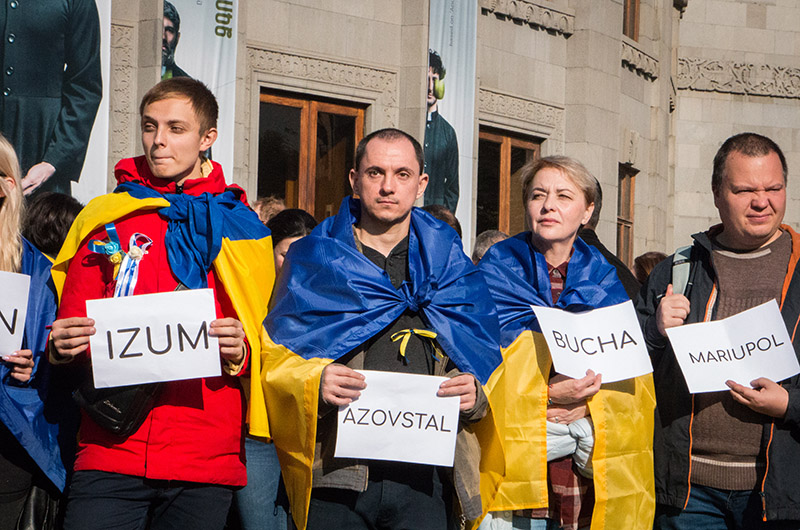 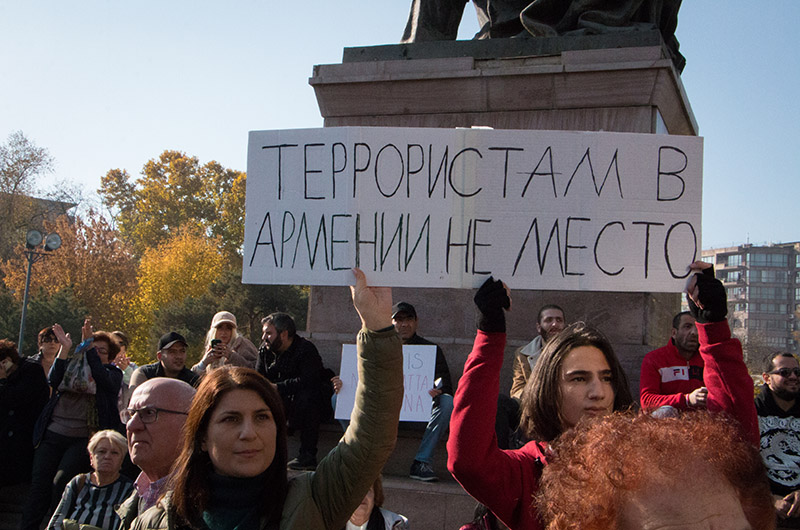 More than 370 000 Russians arrived in Armenia in the first six months of this year, according to the Armenian Migration Service. In September alone, the month when the mobilization was announced in the Russian Federation, a second wave of more than 132 000 Russian citizens arrived in Armenia. While 87% of Armenians see the influx of Russians as a positive thing, according to a survey conducted in April by the Armenian branch of international MPG LLC company, the disagreement with Russian invasion to Ukraine is a rather outnumbered opinion among the Armenian public.

A nation-wide survey organized in June 2022 by the U.S.-based International Republican Institute showed that only 13% of Armenians believe that Russia or Vladimir Putin holds the most responsibility for the war in Ukraine, as opposed to 17% who believe that it is the U.S. who bears the most responsibility. At the same time, whereas 18% favor the economic sanctions against Russia as a consequence of the war, the overwhelming 52% strongly oppose them. With Armenia being largely dependent on the Russian economy as well as Russia accounting for almost a third of Armenian exports, it comes as no surprise that the sanctions have a heavy impact on the Armenian citizens. At the same time, however, the Armenian economy was positively influenced by the influx of Russian citizens. 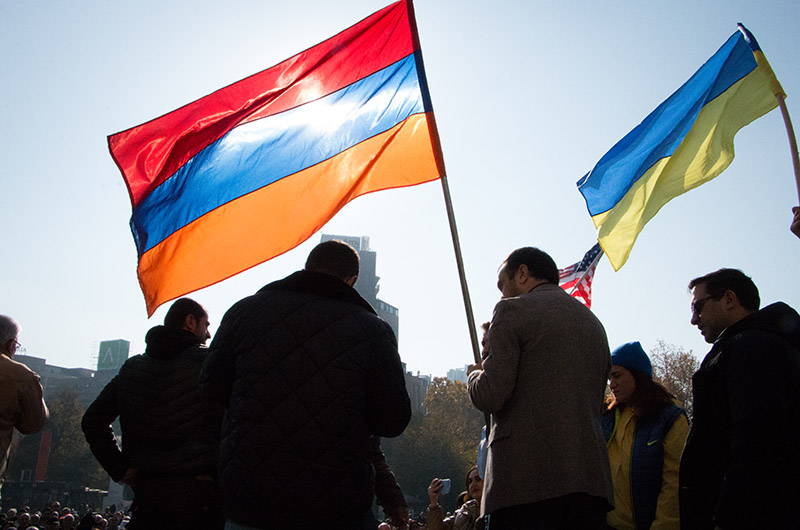 Armenia is in an uneasy position regarding its relations with the Russian Federation, who has been the post-Soviet country’s closest ally since its independence in 1991. After the conflict with Azerbaijan erupted over Nagorno Karabakh in early 1990s and after Turkey consequently closed its border with Armenia, Russia appeared to be the most reliable partner for the post-independence Armenian leadership. Today, not only do some of the major strategic properties, including the Armenian railways, belong to Russian owners – at the same time, more than 500 000 Armenian citizens work in Russia, where they often find better opportunities to support Armenian families at home. In addition, more than a million ethnic Armenians are citizens of the Russian Federation. Armenian second largest city, Gyumri, also hosts one of the biggest Russian military bases outside of the Russian territory, with around 3 300 Russian soldiers constantly present on Armenian soil. After the 2020 conflict with Azerbaijan, Russian military presence further expanded.

None of that, however, means that Armenia is unconditionally supporting the regime in Moscow, especially after the Velvet Revolution in 2018, which overthrew the old administration and brought Pashinyan to power. Pashinyan’s government made it clear from the beginning that Russia stays its most important strategic partner, while at the same time making efforts to strengthen diplomatic ties elsewhere – with Europe, the United States, Iran, China or India.

Pashinyan himself remains careful when referring to the war in Ukraine, naming it neither “war”, nor a “special military operation”, but rather speaking about the “situation in Ukraine” or the “Ukrainian issue”.

„During the last two years, Armenia, a member of the CSTO, was at least three times subject of aggression from the Azerbaijani side,“ Pashinyan said during the summit. „I find very concerning, that Armenian membership in CSTO haven’t deter Azebaijan from aggressive steps, and moreover, that we in the CSTO were until this day not able to find a response to Azerbaijani aggression towards Armenia.“

Rather than addressing the inaction of the CSTO during the summit, Vladimir Putin spoke about the alliance‘s unity. But the alliance’s lack of responsiveness is still raising the question to what extend is the CSTO willing to support the security of its members, and to what extend it serves as a tool protecting the interests of the Russian Federation. 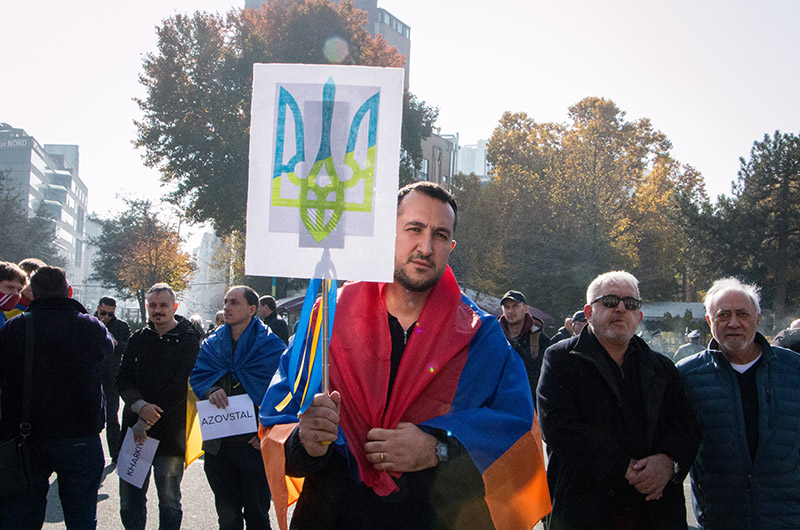 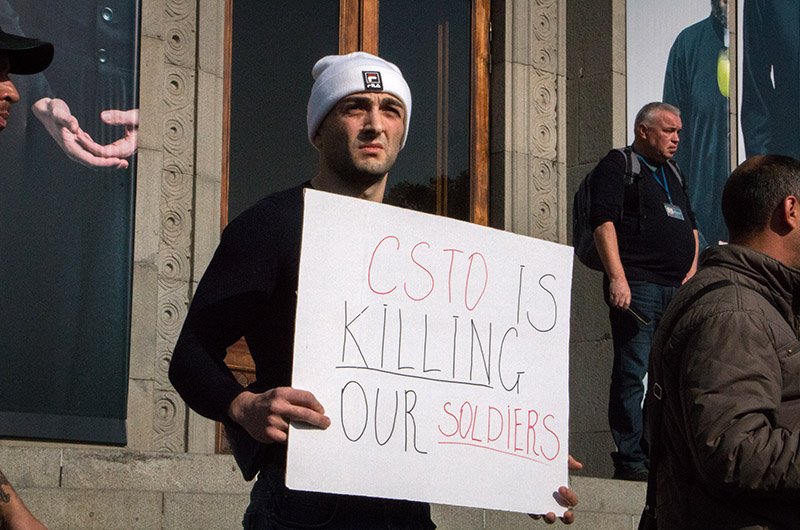