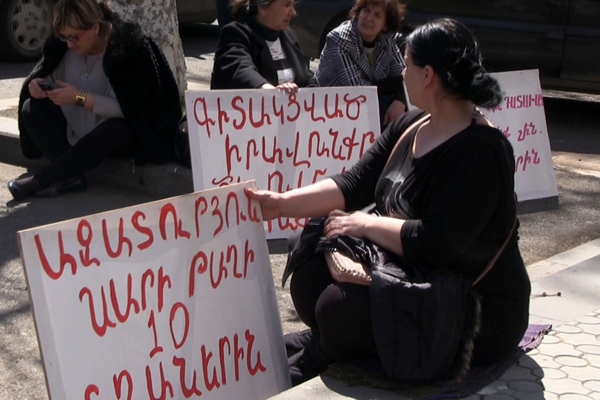 Armenian General Prosecutor Artur Davtyan yesterday met with the relatives of the ten arrested Sari tagh men who have been staging an open-ended sit-in protest outside Davtyan’s office since Monday. The protesters insist that the charges against their relatives – who are being accused of committing violence against law enforcement officers – are unfounded and too vague; they demand that the authorities either specify the charges or otherwise release the men.

Speaking to Epress.am on Friday, Lala Bernetsyan, wife of arrestee Edvard Zeytunyan, said the General Prosecutor has told the protesters that three of the men – Harutyun Torosyan, Arman Adamyan and Zhora Avetisyan – could be granted conditional release if they pleaded guilty to the charges. The demonstrators, however, argued that the men shouldn’t have to plead guilty to unclear charges and told Davtyan that they would continue protesting until their demands were met.

The ten Sari Tagh men allegedly committed violence against police officers during the clashes that occurred in the neighborhood on July 19, the second day of the stand-off in the nearby police headquarters in Yerevan’s Erebuni district; if convicted, they could face up to 10 years in prison. The accused, however, insist that on the day of the clashes they had gone out to find out the causes of the power and water outages in their neighborhood and that their actions were not targeted against law enforcement officers. Incidentally, none of the allegedly affected police officers has identified any of the accused. Moreover, they have acknowledged in their testimonies that the Sari Tagh men had taken to the street because of their household problems.