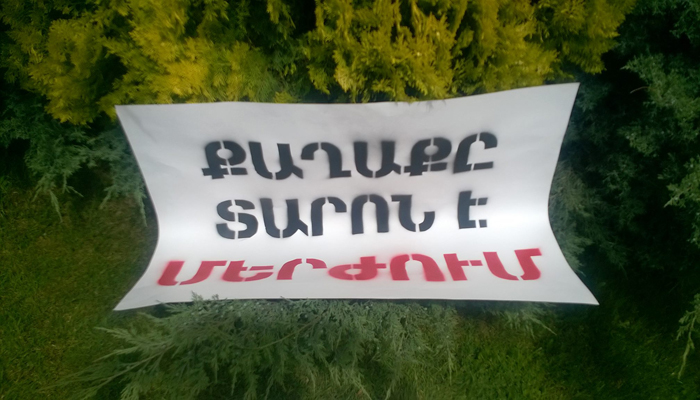 A protest action demanding resignation of Yerevan Mayor and member of the Republican Party of Armenia (RPA) Taron Margaryan was held today in front of the Municipality building.

The protesters were chanting “Taron leave!”, “RPA left and forgot its belongings”, “RPA’s time is out”, “We reject Taron”. In their speeches, among other the protesters voiced the problem of public transport. According to them, throughout the last 7 years the operation of public transport in Yerevan has been humiliating for both the passengers and the drivers, and served exclusively the interests of the owners of transport lines, most of whom are affiliated with the RPA. 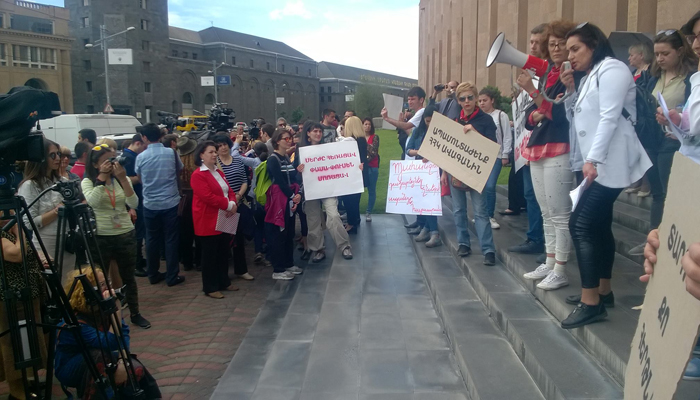 The protesters also pointed to illegally built cafés in public parks, destruction of green areas, mass shootings of stray dogs by Unigraph – X Ltd., and so forth.

Sofya Manukyan, environmentalist and participant of the protest, spoke about the unsolved problem of garbage collection in Yerevan.

“You have taken a loan, you are going to occupy another 30 hectares of land, and all you plan is to build a landfill that will serve for another 30 years. And then what? Another loan and another landfill? You promised to build a waste recycling plant 7 years ago. Where is the plant? If you can’t solve the problem, then leave and that’s that”.

Sona Manukyan, who lives in Kentron district, spoke about privatization of children’s playgrounds in public parks (in such places as “Santa Fe”, Khanjyan park’s café area, etc). According to her, part of the Khanjyan park, for instance, was occupied by a sports center that belongs to Gagik Tsarukyan, oligarch, MP and chairman of “Tsarukyan Alliance” faction, who renovated and closed the area, making it available only for the clients of the sports center.

Another protester raised the issue of condominiums that collect money for the maintenance of multi-apartment buildings. “In a 9-story building every apartment pays around 1500 AMD, which makes 50-60 thousands AMD per building per month. What does the condominium do with your money, where does your money go? In the meantime, by November 2017 the Ministry of Emergency Situations has recorded 240 elevators that were not appropriate for service and had to be closed down. This is yet the official data. People are literally saving one another from the elevators that collapse. How dare they (the condominiums) still speak about the maintenance services?”

Civic activist Anna Nikoghosyan spoke about the acts of violence committed by the Republican members of the City Council. “The public was shocked by the incident of violence against women members of the City Council, accompanied by sexual harassment and threats. Those responsible were not hold accountable and even continued repressions against the women”. 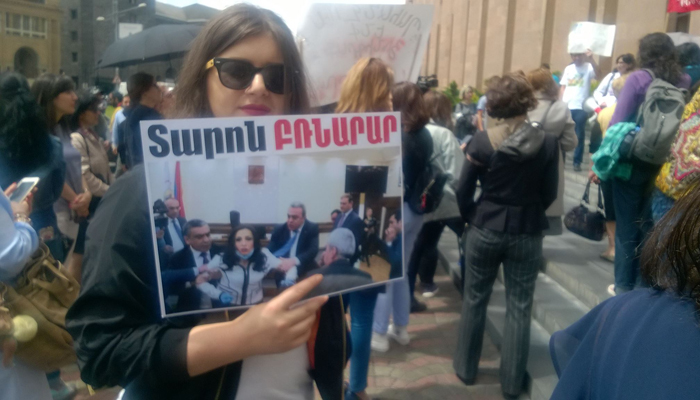 During the speeches several demonstrators blocked the street in front of the Municipality building and chanted “ Taron, come down! Taron, come down!”, “No to illegal construction!”, “No to gangsters, no to violence!”, “Taron, leave!”, “RPA left and forgot its belongings”.

None of the representatives of the City Council came down to speak to the demonstrators.